Actress Emily Blunt has been a part of a number of acclaimed and beloved projects throughout her career thus far, from “The Devil Wears Prada” to “Into the Woods” to “A Quiet Place,” but her latest struck a chord with her in a unique way.

The eight-episode limited series “The English” not only finds Blunt leading a 19th Century-set bloody revenge Western, but also marks her first time producing a project of her own. Something she says her husband, actor and filmmaker John Krasinski, has been encouraging her to do for quite some time.

“It was sent to me as a pilot, and I knew that they wanted me to help sort of build it and grow it with them, get it sold, get it made,” Blunt told TheWrap in a recent interview. “And I love the aftermath, when I’m done with the acting side of things, I love post-production, I love the edit, I love the music, I love the color timing, I love all of it. I’m a geek for all of it. So I think over the years, I’ve been around the block long enough that I’ll give all of myself to whatever I do, whether you’re going to give me a credit for it or not – that that never mattered so much, I mean my husband’s been saying for years, ‘You should just ask for it, because you’re kind of doing it anyway.’” 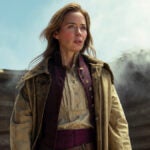 Also Read:
Emily Blunt Is Out for Revenge in Rollicking, Violent Trailer for Prime Video Western ‘The English’ (Video)

Blunt credits “The English” creator Hugo Blick, who directed every episode, for making the experience an easy one, but no less impactful.

“I didn’t need to do much to help go build it. It’s all in [Hugo’s] freak genius mind, this whole show was so extraordinary. But I would say this project and the experience of working on it has been so piercing to me and so moving, and certainly the one I feel closest to out of all of them.”

Blunt stars in the series as a woman seeking the man who murdered her child opposite Chaske Spencer, who plays Eli, an ex-calvary scout and member of the Pawnee Nation who is similarly on a path littered with violence. And while the show is certainly blood-soaked at times, it is refreshingly sensitive when it comes to the effect doing violence has on the characters.

“It’s all new to her, she’s essentially been woken up to this new brutality. And she does partake in it, but yes, I found the humanity in how she’s affected by it very new and very surprising,” Blunt said. “It’s not cool. She doesn’t do it with swagger. She does it with an ability and a purpose. But it’s more like instinctive, it sort of just takes her over and she does it, and then the aftermath of it is where the humanity comes out.”

For Spencer, when it came to portraying the violence on set, he admitted to having some discomfort and tried not to get too wrapped up in that particular headspace.

“It’s always uncomfortable doing scenes like that, and you have to put yourself in those situations,” Spencer told TheWrap in the same interview. “Even though you’ve never experienced that, you still have to figure out how to correlate that and get those emotions right with the scene. I try to take things lightly because if I think too hard on those scenes, I can really feel the impact and not focus too much on my character.”

Blunt noted that Eli is affected by her character’s reaction to the violence, and it’s the complexity of both characters that attracted her to the project in the first place.

“I loved the modernity of that, I thought that was so fresh. And that nobody is just one thing, nobody is just purposeful, just strong or just scared. People are a myriad of things at any one time. And I think that’s what I loved about these characters. Because Hugo’s not afraid of exploring everything to do with somebody.”

But with Blunt in action mode more than a few times in “The English,” we had to ask, is there any hope for the long-developing “Edge of Tomorrow” sequel?

“We’d love to do it,” Blunt replied. “I’d love to, it would be great. I’d have to have a constant chiropractor for the rest of my life, but I loved doing that film, so who knows?”

“The English” is now streaming on Prime Video.