Fresh stories centered on World War II atrocities are rare. “The Innocents,” at its core a treatise on faith, is one of those blessed rarities, all the more bracing for being told from a female perspective.

This evocative, nuanced story, set in Warsaw in December 1945, focuses on a French Red Cross doctor who secretly helps a convent of Benedictine nuns who had been brutally raped by Russian soldiers. Mathilde (Lou de Laâge, “Breathe”) is attending to her work helping wounded French soldiers when a distraught nun runs into the makeshift Red Cross infirmary.

Also Read: Academy Scores Record Diversity With New Members - But What About Next Year?

Pressing afflictions loom. Mathilde tells the nun to seek help from her native Polish medical workers, as her assignment is to care for her ailing French countrymen. When she spies the nun kneeling and praying in the snowy woods, Mathilde decides to help. From that moment on, her life is changed.

Director Anne Fontaine (“Adore,” “Coco Before Chanel”) creates a deeply moving, and emotionally layered meditation on faith in the face of devastating challenge. The result is a complex, resonant and captivating drama that may figure into the mix when foreign language Oscar nominees are chosen. 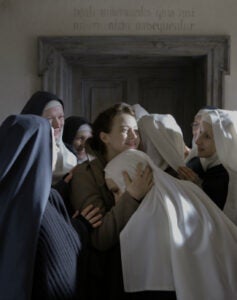 The cinematography by Caroline Champetier (“Holy Motors”) is bleakly gorgeous, the story unspooling in a muted palette of black, white, taupe and grey. Even the sound design is worth noting: as the anguished nun runs to the French infirmary for succor, we hear the sound of her feet crunching on the tightly packed snow. Fontaine is a gifted director, focusing equally on resonant details and the larger picture.

What that picture presents is a convent of nuns traumatized by sexual abuse. And the outcome of that abuse is even more urgent: Seven nuns are pregnant.

The cast is impeccable, with stand-out performances by Agata Buzek as Sister Maria and Agata Kulesza (“Ida”) as the Abbess, whose directives rule the convent. The Abbess summarizes their predicament: “We were persecuted by the Germans, then the Russians arrived. They burst into the convent. It was an indescribable nightmare. Only God will help us overcome it.”

The screenplay, a collaborative effort by Fontaine, Sabrina B. Karine, Alice Vial, and Pascal Bonitzer, is pitch-perfect. Unlike some American productions where many writers tweaking the script can spoil the overall effect, the joint writing efforts, from an original concept by Philippe Maynial, achieve a symphonic effect.

Mathilde, an unapologetic non-believer, takes serious risks to help the nuns and tries to counter their spirituality with science. (“God’s help won’t be enough,” she tells them.) She offers to send a Polish midwife, but the nuns are adamant that their conditions not be revealed. “If you do that, our convent will be shut down,” the Abbess tells her. “If we’re evicted our girls will be objects of shame. ”

The violated women fear eternal damnation. Most are too ashamed to undergo physical examination. When Mathilde asks if the nuns can set God aside so she can examine them, the Abbess simply states: “You don’t set God aside.”

The dialogue is superb, both powerful and understated, bolstering the emotional authenticity of the performances. Over time, the French doctor becomes further enmeshed in the lives of the agonized Polish nuns. And when Mathilde herself narrowly escapes a violent assault, she finds quiet solace in the rituals of the nuns’ cloistered world.

But those peaceful moments are routinely shattered by the realities of their war-torn existence. As the nuns sing their prayerful hymns, the angry voices of Russian soldiers intrude upon the harmony. They are convinced the nuns are “hiding enemies of the people.” They want to search the convent. Mathilde’s fast thinking averts disaster.

The ongoing shame and guilt nearly crushes the nuns’ spirits and threatens to obliterate their faith. One nun anguishes: “However much I pray, I cannot find any consolation. Every day I relive what happened. I still smell the stench of them.” Clearly, they are ill-equipped to raise children in their convent and relatives must be found to raise them. What ensues is deeply disturbing.

Fontaine powerfully conveys the religious women’s inner torment, but with restraint, both visually and verbally. An explanation of shaken faith is haunting: “At first you’re like a child holding your father’s hand, feeling safe, ” says Sister Maria. “Then a time comes — and I think it always comes — when your father lets go. You’re lost, alone in the dark. You cry out, but no one answers. Even if you prepare for it, you’re caught unawares. It hits you right in the heart.” Mathilde, meanwhile, faces her own crisis of faith, struggling for respect in a male-dominated profession.

Occasionally “The Innocents” teeters on melodrama, but its moody atmosphere and artistry rein it back in. Sadly, this wrenching tale, although set more than 70 years ago, with its riveting story of wartime abuses and violence against women, still feels timely.