President Trump is missing a rare opportunity to point out legitimate “fake news.”

Over the weekend, a photo began to spread like wildfire across social media of Donald Trump and other world leaders piercingly looking towards Russian President Vladimir Putin at the G20 international forum. Trump, along with Turkish President Recep Erdogan, looks to be leaning in, earnestly waiting on the input of a relaxed and slightly amused Putin.

A Renaissance painting of our age. pic.twitter.com/G0mAYRl9Mz

With more reports emerging of a potentially seedy connection between President Trump’s camp and Kremlin cronies, the image was especially alarming.

But there’s just one problem: the pic is a fake.

The doctored shot began to make the rounds thanks to Putin fanboys. Russian “journalist” and Putin stooge Vladimir Soloviev — a man with more than 1.6 million Twitter followers — was one of the first to share the picture on Facebook, but has since taken it down.

Also Read: Ivanka Trump Sits in for President at G20, Enraging His Critics: 'This Is How a Crime Family Works'

The authentic picture was taken by Kayhan Ozer of Getty Images, with the Associated Press and others snapping similar shots. Putin was added to the center of a conversation between Trump, Erdogan, and Turkish Foreign Minister Mevlut Cavusoglu, while German Chancellor Angela Merkel hovers nearby. 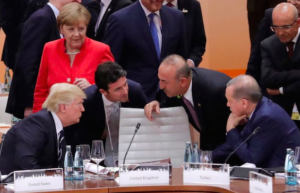 The empty seat wasn’t even for the “Russian Federation,” as the photoshopped picture showed, but was reserved for the UK.

It might be hard to believe, but the Trump-Putin mashup is a reminder the internet can be misleading.