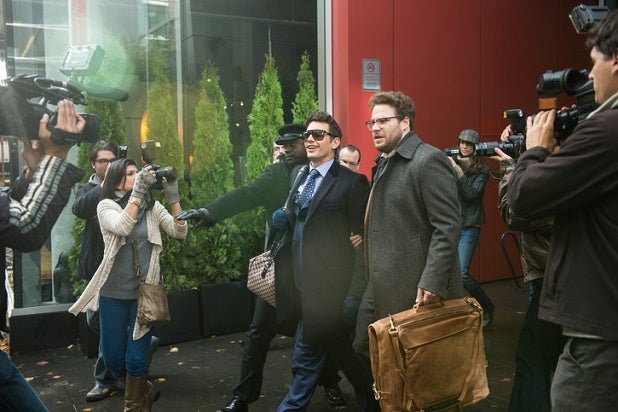 “The Interview” has become the year’s top-selling video-on-demand title on both Google Play and YouTube, a Google spokesperson said on Monday.

It’s only taken six days for the controversial comedy to seize the top spot, but that’s no surprise as never before has a film had the sort of media attention in the run-up to its release as “The Interview.”

Sony made the R-rated Seth Rogen-James Franco comedy available online Wednesday to rent on Google Play, YouTube Movies, Microsoft’s Xbox Video and its own dedicated website at a rental price of $5.99. The film was also available for purchase for $14.99.

Also Read: Will ‘The Interview’s’ $15 Million Online Haul Be a Game Changer for Hollywood?

Sony also released the film on Christmas Day in 331 independent theaters, marking the first time a major studio had opened a movie in theaters and offered it online at the same time. “The Interview” made $15 million from online and $2.8 million at the box office, the studio announced Sunday.

“The Interview” was originally set for wide release on Christmas Day, but Sony scrapped that plan after the nation’s biggest theater chains opted out in the wake of terror threats, purportedly from the hackers who shut down the studio in late November.

Days later however, under pressure from President Obama and Hollywood creatives, the studio backtracked and said it would release the film. The major theater chains again opted out however, this time because Sony was rolling out the film online at the same time. That’s a hot-button issue for theater owners, who feel it would cut their profits.

The controversy has triggered a war of words between the U.S. and North Korea, which the FBI has linked to hackers who tried to block the release of the film about two American journalists assassinating the nation’s leader, Kim Jong-un.