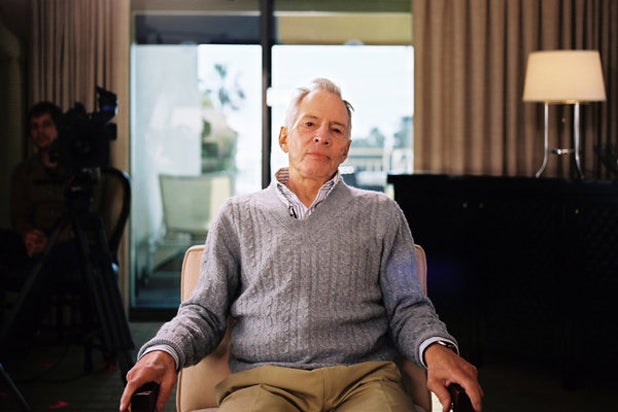 Robert Durst, the subject of HBO’s “The Jinx,” is being sued for $100 million by the family of his wife who mysteriously vanished in 1982.

Kathleen McCormack Durst’s three sisters and 101-year-old mother​,​ Ann McCormack, claim that the eccentric real estate mogul killed her and then hid the body​, thus denying them the right to a proper funeral.

The lawsuit filed​ in Nassau County Supreme Court in New York on Monday contends that Durst violated the McCormack family’s right to sepulcher, a rarely used New York law granting family members the immediate right to possession of a body for burial.

“The family’s priority has been and continues to be to provide Kathleen with a proper and dignified burial,” Robert Abrams, a lawyer for the McCormack family, said, according to the New York Times.

The suit also claims that Durst “murdered Kathleen,” his 29-year-old first wife. If successful, it would strip the 72-year-old of much of his wealth, which is estimated at a net worth of $100 million.

McCormack Durst disappeared from her Westchester County home nearly 34 years ago on a cold January night. Her husband went on to live a carefree existence moving from New York to Los Angeles to Houston and back again, fueled by a constant flow of cash from his estranged family’s real estate empire.

He has been in prison in New Orleans since March on a gun charge following a string of legal issues in the wake of the ground-breaking HBO documentary that premiered last February, during which he was caught on a live microphone seemingly confessing to Kathleen’s murder and the deaths of two others.

“What the hell did I do? Killed them all, of course,” he whispered in the shocking finale, which aired a day after his arrest.

Durst is expected to be sentenced on Dec. 17 to more than five years in prison after acknowledging his guilt in the gun possession case, according to the Times. He is also scheduled to be transferred to Los Angeles some time in 2016, where he has been charged with the execution-style murder of Susan Berman, who served as his spokeswoman after his wife’s disappearance.