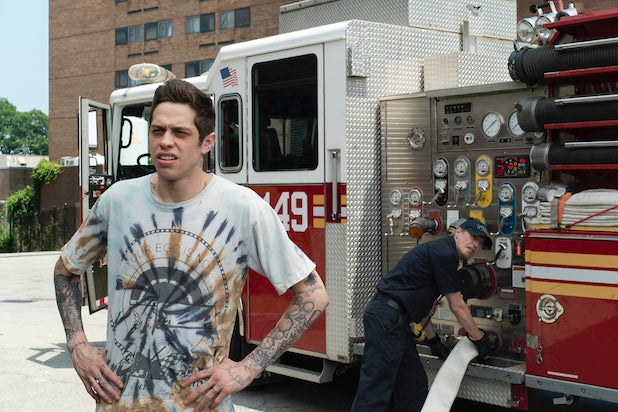 Back when Seth Rogen and Paul Rudd were starring in Judd Apatow’s movies, it was easy to see his leading men as stand-ins for Apatow himself – comics and stoners whose reluctance to grow up seemed likely to hit a nerve in the writer-director. But while “The King of Staten Island” in many ways treads in familiar Apatow territory, it’s hard to see the lead character, Scott, as a version of anybody but the actor who plays him, Pete Davidson.

“Saturday Night Live” regular Davidson, who also co-wrote the film with Apatow and Dave Sirius, is an underachiever who shares a lot of stuff with Davidson: His birthplace of Staten Island, New York; his Crohn’s disease; the death of his firefighter father when he was 7; his borderline personality disorder and occasional suicidal thoughts; and the 40-plus tattoos, many lacking in a certain artistry, that cover his body.

Still, it’s hard to imagine the character in the movie having the wherewithal to land a gig on “SNL,” and maybe that puts a needed bit of distance in this film; if we believed that was really Pete Davidson on the screen, it’d be very hard to get many laughs out of the fragility of his character and the wreckage of his life. “The King of Staten Island,” which is going straight to VOD in lieu of a canceled theatrical release, tiptoes carefully around fraught emotional issues and in the process manages, perhaps surprisingly, to be a fairly mature movie about a not-at-all mature guy.

And however much of Davidson’s autobiography is here, the movie still feels Apatow-esque. It has a stoner protagonist who needs to grow up, and a generous running time that is par for the course for a director who hasn’t brought a comedy in at less than two hours since his first movie, “The 40-Year-Old Virgin,” 15 years ago.

Of course, the leisurely running time is kind of the point with Apatow, for whom the seemingly aimless conversations are every bit as significant as the plot developments. His protagonists are often looking for friendship and community, and often as not they find it in a night of sitting on the couch, smoking and watching TV or playing videogames.

That’s what Scott and his friends do on Staten Island, the New York City borough that he describes as “the place that New Jersey looks down on.” The town’s inferiority complex seems to have seeped into Scott’s being, along with a crippling sense that the coolest person in his life died when he was a child and left him with an impossible legacy to live up to and none of the tools he needs to even try.

(Davidson’s real father was a firefighter who died in the World Trade Center on September 11; in the movie, his death takes place in a local structure fire.)

Scott drinks and takes drugs even though he and his friends don’t even get high anymore, and he takes anti-depressants that don’t stop his depression, but at least give him more stamina when he’s having sex with his sort-of girlfriend, played by Bel Powley.

He does have one grand ambition: to open a combination restaurant and tattoo parlor called Ruby Tattoosday’s. But considering the health issues of that particular combo, and the fact that Scott can’t even get an internship at the local tat joint, it hardly seems like a realistic goal.

He also doesn’t really seem driven to achieve it, or to achieve anything else for that matter. Scott lives with his mother, played by Marisa Tomei, and is aghast when she starts dating seriously — worst of all he’s another firefighter, played by Bill Burr — and suggests that Scott get his own apartment. “I need that safety net,” he tells her. “I don’t have my s— together!”

Also Read: Fred Willard Remembered by Jimmy Kimmel, Judd Apatow and More: 'There Was No Man Sweeter or Funnier'

The movie has a long middle stretch where Scott is lost and aimless – and while the film itself feels aimless, it’s not lost: Apatow wants us to sink into that torpor, even if that can test an audience’s tolerance level for Davidson, never the most welcoming or comfortable of performers.

The actor and the character carry around such a well of sadness that it can be hard to laugh and hard to see a way out. Still, Scott works slowly toward the rather enormous goal of coming to terms with absence – and you’ll have to admit that in a wise but sad-sack firefighter played by the irreplaceable Steve Buscemi, he finds a wholly suitable mentor.

Davidson has perhaps found the right guy in Apatow to help tell the story, too. “The King of Staten Island” can test the patience of all but fervid Davidson devotees, but it also manages to be an affecting comedy that moves softly through some dangerous territory.