David (Colin Farrell), a man recently dumped by his wife, arrives at The Hotel in what looks like a state of disorientation. His face is blank and his body is a thickly-padded testament to what he probably believed was marital contentment, as he checks in to the mandatory residence with his brother, who is a dog.

Yes, mandatory. This is a world where single people are given 45 days to find a mate. And yes, his brother is a dog. This is also a world in which day 46 finds you transformed into the animal of your choice, so most people choose to become dogs. Though the film doesn’t explain why, you already know: everyone loves dogs, meaning there’s still a last-ditch shot at post-human affection. The traumatized David, however, has lost contact with his ability to love again. He wants to become a lobster, reasoning that he enjoys swimming in the ocean, and that at least lobsters have blue blood like aristocrats.

The Hotel is less like a resort and more like a concentration camp of forced dating. David eats alone, sleeps in a narrow bed (in the Orwellian room # 101), is denied sexual self-pleasure, and, like the rest of the captive singles, spends the majority of his limited time struggling to find a match.

The couplings are almost always based on the flimsiest of coincidental commonalities. Fellow inmate The Limping Man (Ben Whishaw, “Spectre”), unable to find a similarly impaired female, intentionally gives himself nosebleeds in order to cozy up to Nosebleed Woman (Jessica Barden, “Far From the Madding Crowd”). When their coupling turns sour after only a few weeks, they’re assigned a child. This is routine.

Also Read: Colin Farrell's 'Killing of a Sacred Deer' Picked Up by A24 at Cannes

When not subjected to robotically-acted sketches promoting the benefits of being coupled — you’re less likely to be mugged, someone is always there to Heimlich that chicken bone out of your throat — unfortunate singles are handed tranquilizer guns and forced to hunt Loners in the nearby woods. These are the people who’ve escaped, “Logan’s Run”-style, into the wilderness, where they share space with castoff animals. (It’s Ireland, but that doesn’t mean you won’t encounter the occasional camel strolling past.) Led by the dictatorial Loner Leader (Lea Seydoux, “Blue is The Warmest Color”), these folks have their own set of restrictions and equivalent unhappiness. As a precaution, so as not to inconvenience the others, everyone must pre-dig their own grave. 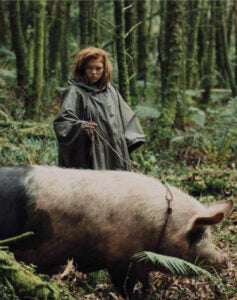 It’s a no-winners landscape in the hands of director Yorgos Lanthimos (sharing screenwriting credit with Efthimis Filippou), whose earlier arthouse offerings, like “Alps” and the Academy Award-nominated “Dogtooth,” dove deeply into similar pools of human sadness. “Dogtooth” involved a family sequestered by a perverse father, and “Alps” explored grief with a bizarre story of amateur actors who rent themselves to families as surrogates for the recently deceased.

Lanthimos’ tone is always chilly, devoutly clinical, and bleakly funny, yet full of compassion for his numbed creations. At one point in “The Lobster,” Farrell — who delivers a daring performance that’s a perfectly calibrated, lifeless blank — explains his decision to mate with the Heartless Woman (Angeliki Papoulia, “Dogtooth”) as a path of least resistance. He’s decided that it’s easier to pretend to have no feelings than to manufacture real ones, and he knows that the secret of survival isn’t learning to love, but learning to exist more comfortably with an internal void. Her name a warning in itself, Heartless Woman causes David to bolt for the Loner woods. There, he meets Near-Sighted Woman (Rachel Weisz), and the circle of lovelessness keeps spinning.

And none of it is all that far from real-world truth. The genuine, human search for love is routinely exploited by the world around us. It spawns bizarrely unreal romantic comedies, Nicholas Sparks novels, terrible hookup apps, “The Bachelor,” colossally expensive destination weddings, weird anti-Valentine’s Day parties, and suicidal songs about breakups where the singer usually asserts that not to have “you” is to “have nothing.” If Lanthimos’ gloom-vision is decidedly more blunt, it’s no less accurate an assessment of every heartless thing human beings already inflict on one another. His is a wild, sad, mordantly funny dystopia, but one that gives sexual desperation the bad name it deserves.