One of the biggest questions fans had after seeing the first trailer for “The Matrix 4” was how “Watchmen” actor Yahya Abdul-Mateen II was playing Morpheus opposite Keanu Reeves. The film – officially titled “The Matrix Resurrections” – brings back Reeves as Neo and Carrie-Anne Moss as Trinity, but instead of Laurence Fishburne as Morpheus, Abdul-Mateen II is in the role.

Warner Bros. and co-writer/director Lana Wachowski are keeping a tight lid on spoilers, and Fishburne previously revealed he was not invited back for the sequel, but now Abdul-Mateen II is offering a bit of clarity about where his Morpheus fits into the overall story.

As we glimpsed in the trailer, Neo and Trinity – both of whom died in 2003’s “The Matrix Revolutions” – are alive and living in The Matrix, seemingly unaware of the events they experienced in the original “Matrix” trilogy. Abdul-Mateen II approaches Neo and opens his eyes to the truth of the world around him, just as Fishburne’s Morpheus did in the groundbreaking first “Matrix” movie. And Abdul-Mateen II took to social media after the trailer to confirm he is indeed playing Morpheus. 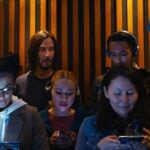 But in speaking with EW, Abdul-Mateen II conceded that he plays a “new Morpheus” in the film. “Laurence already did what had to be done,” the “Trial of the Chicago 7” actor said. “I think what the script provided was a new narrative and some new opportunities that make room within the ‘Matrix’ universe for a new Morpheus.”

Abdul-Mateen II declined to go into specifics but did add that this is “definitely a different iteration of the character,” while noting that his Morpheus knows exactly what’s happening. “I play a character who’s definitely aware of the history of the ‘Matrix’ [and] the history of Morpheus. This character is on a journey of self-discovery. There’s a lot in our story that’s about growth, defining your own path. Morpheus isn’t exempt from that.”

A prevailing theory is that “The Matrix Resurrections” follows one of the many alternate paths of “The One” that were teased in the original trilogy. If you’ll remember, Neo learns that he’s not the first Neo to be dubbed “the One,” as this process had played out many times before – all of which ended in failure until the events of the “Matrix” trilogy.

Wachowski recently revealed that she was inspired to return to the world of “The Matrix” after the deaths of both of her parents in quick succession, which spurred her to tell a story about resurrection. And while Lana chose “The Matrix 4” to work through her grief, her sister Lilly Wachowski – with whom she wrote and directed the original trilogy – found it too difficult to return to this world and declined to come back in an official capacity.

“The Matrix Resurrections” will be released in theaters and on HBO Max on Dec. 22.