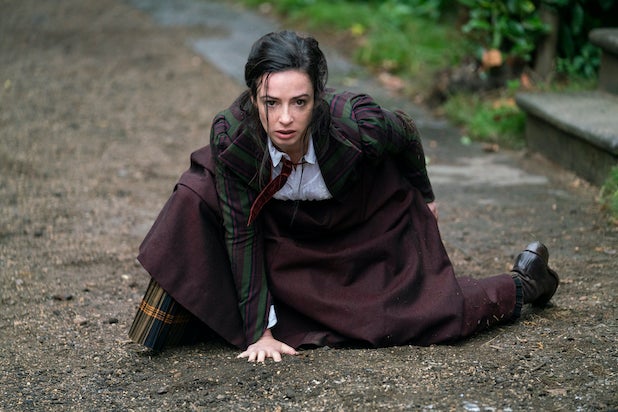 Joss Whedon’s fantasy series “The Nevers” premieres Sunday on HBO. The show, which Whedon exited for personal reasons after the first six episodes of Season 1 had wrapped production, stars Laura Donnelly and Ann Skelly as the leaders of a group of people who have spontaneously developed supernatural abilities in Victorian England. Within the show’s universe, these outliers are referred to as “The Touched.”

So then why is the show called “The Nevers” — a term which you actually never hear used in the show’s first episode?

“Joss had said way back at the beginning, before we went into production, that it speaks to the concept of these people who should have never existed,” Donnelly, who plays Amalia True, a quick-fisted widow with the ability to see glimpses of the future, told TheWrap. “They are seen as an abomination in society and, therefore, they should have never been. I think it speaks as well to that idea that if you feel like an outcast in society, if you feel like you don’t belong or you are in some way wrong, then you can turn that in on yourself. It’s not just other people’s view of you. You can feel, perhaps, like you never should have been, that you are in some way deeply flawed, deeply wrong. And so I think it speaks to the social perception of ‘The Touched’ as a whole.”

Also Read: 'The Nevers' Star Laura Donnelly Was 'Gutted' by Joss Whedon's Exit: 'I Had a Wonderful Experience Working With Him'

“The Nevers represents a group of people who were never supposed to have power, never supposed to work together, never meant to change the world — but in our show, they do. And this series explores what happens when this unlikely crew chooses to wield their collective power and demand dramatic change from an established order seemingly incapable of transformation,” he said in an email to TheWrap.

The first episode of “The Nevers” is set in London in 1896, three years after an inexplicable event suddenly equips Amalia True, Penance Adair (Skelly) and others with these supernatural abilities, making them outcasts who must work to protect each other.

“The Touched are a group of people, mainly women, but not all women, in this society and they have spontaneously developed these abnormal abilities. Not necessarily superpowers, not everything is even useful, but everybody has a different strange ability. And those abilities are referred to as a ‘turn,'” Donnelly said. “So Amalia’s turn is that she can see just ever so slightly into the future. But she only really has glimpses of the future, not something that she can necessarily understand or even really use. She kind of spends a lot of the first few episodes really coming to grips with that and how she can use it to her advantage. The group as a whole are known to society as ‘The Touched,’ and they are not necessarily favorably looked upon by those in power and those interested in keeping the established order.”

“The Nevers” Season 1 is spilt into two parts, with the first six episodes airing weekly beginning this Sunday, while new showrunner Philippa Goslett is at work in the writers’ room breaking the second half of the season, which is expected to begin filming later this year. Though this was not the initial plan when the show received its 10-episode straight-to-series order at HBO in 2018, Kaminsky tells TheWrap it works out that the sixth episode happened to be Whedon’s stopping point.

“Episode 6 was always meant to be a bit of an outlier episode,” he wrote. “When the covid pandemic made production somewhat untenable, the decision was made to break the season into two parts. Episode 6 felt like a natural place to pause — some aspects were reconceived to setup part B, but by and large, the episode remains as originally intended.”

By that episode, Donnelly says viewers will know much more about Amalia and how she became the badass supernatural lady she is.

“So it’s certainly not apparent at the beginning where these particular skills have come from, but that does become explained by the end of the sixth episode,” she said. “The sixth episode is wonderful because it wraps up a lot of different threads. And there will be explanations. So even though we’re only finishing halfway through a season, people won’t be left dangling as such for however long it will be before the next episodes… The audience will get the answers that they’re craving. There will be a satisfying wrap-up by the end of this half-season.”

Readers can find TheWrap’s interview with Donnelly about Whedon’s exit from “The Nevers” and her experience working with him here.

“The Nevers” premieres Sunday at 9/8c on HBO.