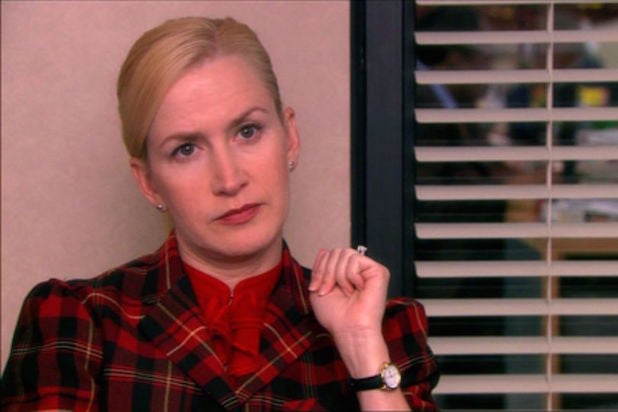 Before fans get excited about “The Office” revival, they should make sure ex-castmembers like Angela Kinsey are cool with it.

When reports began circulating on Monday that NBC is planning an “Office” revival for 2018 (sans Steve Carell, mind you) viewers jumped right on social media to give their hot take on whether it was a blessing or a curse. Kinsey (a fan and a major player in the original series) was among the voices to chime in. A very confused voice, mind you.

“Ummm @nbc call me…. have a quick question for you,” Kinsey tweeted at her former bosses. “Also call @creedbratton because he is blowing up my phone. K. Thx. Byeeeeeee.”

Kinsey was referencing her friend and former co-star Creed Bratton, who played Creed on the series.

As we wrote, the world’s best boss, Michael Scott (Carell) will not return for the series, but the revival would still take place at the Scranton, PA, office of Dunder Mifflin Paper Company. According to TVLine, which first reported the news, a search for a new boss is underway. The series would premiere in 2018, according to TVLine’s report.

Rumors of “The Office” getting a revival have been swirling since the summer, but NBC previously said those rumors were false, though network president Bob Greenblatt told Deadline that if “The Office” creator Greg Daniels wanted to do a revival, he would be game.

“The Office” ran for nine seasons and starred Kinsey, Carell, John Krasinski, Jenna Fischer, Rainn Wilson and Mindy Kaling, among others, and was based off the British comedy from Ricky Gervais.

Ummm @nbc call me…. have a quick question for you. Also call @creedbratton because he is blowing up my phone. K. Thx. Byeeeeeee. ????