Fall is when the Oscar contenders come out to play, but there’s a twist in the way this year’s awards season has hit the multiplexes: The major studios are leading the way.

Four of the top five movies on the GoldDerby.com experts’ list of predicted Oscar nominees come from the major studios, as do six of the top 10 and 11 of the top 20.

This week, Sony will release Paul Greengrass’ “Captain Phillips,” a gripping thriller about the takeover of a cargo ship by Somalian pirates.

All three movies are tough, exciting and unexpectedly emotional. All three have the potential to figure in the awards race. And all three are from major Hollywood studios.

They’re not alone. This year’s major-studio contenders also include Sony’s “American Hustle” and “Monuments Men,” Disney’s “Saving Mr. Banks,” Fox’s “The Secret Life of Walter Mitty (right), Warner Bros.’ “Her” and “Prisoners,” and Paramount’s “Nebraska” (which they’ve given the Paramount Vantage label, although that company no longer exists as a separate entity), “Labor Day” and, if it’s ready in time, “The Wolf of Wall Street.”

Contenders from indies and specialty labels, meanwhile, include the presumed frontrunner, Fox Searchlight’s “12 Years a Slave,” as well as CBS Films’ “Inside Llewyn Davis,” Weinstein’s “Lee Daniels’ The Butler” and “Fruitvale Station,” Roadside’s “All Is Lost” and Focus Features’ “Dallas Buyers Club.”

Also read: Oscar Shakeup: ‘Captain Phillips’ Is Up, ‘Foxcatcher’ Is Out – and What’s Up With ‘Wolf of Wall Street’?

What seems apparent is that in the last few years, the majors have  gotten tired of watching the Oscar race from the sidelines. When Ben Affleck’s “Argo” landed the Best Picture prize in February, it ended a five-year run in which that award went to indies like the Weinstein Co. and Summit, or studio-affiliated labels like Fox Searchlight and Paramount Vantage.

Indeed, since the Academy moved from five to 10 Best Picture nominees in 2009 (followed two years later by a shift to a variable number of nominees), the major studios have captured more than half the nominations: Nods have gone to Sony’s “Zero Dark Thirty,” “Moneyball” and “The Social Network,” Universal’s “Les Miserables,” 20th Century Fox’s “Life of Pi” and “Avatar,” Paramount’s “Hugo” and “True Grit,” Warner Bros.’ “Inception” and “The Blind Side” and Disney’s “Toy Story 3,” “Up” and “The Help” (via DreamWorks), among others. 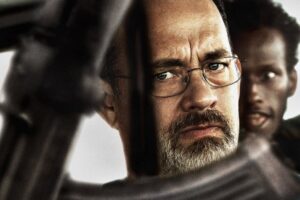 This, after a decade in which barely more than a third of the nominations — 17 out of 50 — went to major-studio films.

“We’re in a phase now where some really good material is being brought to the studios though producers or writers or companies like Alcon,” said Michael De Luca, who produced “Captain Phillips” (left) as well as recent Best Picture nominees “The Social Network” and “Moneyball,” all for Sony.

“The material was there, the right budgets were there, and the studios see the wisdom of going for those movies in these circumstances.”

De Luca doesn’t think the studios have deliberately set out to muscle their way back into an Oscar race that had seemingly bypassed them for years – instead, he told TheWrap, their return to the race is as much happenstance as their departure from it was.

“It’s a roll of the dice,” he said. “In the ’90s, when I was at New Line, you had Paul Thomas Anderson, Wes Anderson, Spike Jonze and filmmakers like that all hit the business at the same time. Those filmmakers and their agents and managers and reps decided that going the independent route was better for their careers, so things went to Fox Searchlight or Harvey [Weinstein, then at Miramax] or us. 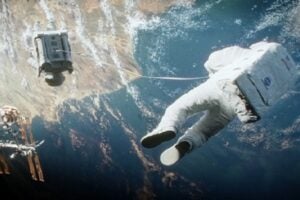 “It gave the appearance at awards season that the studios had vacated the real estate, but it might have been a function of the kind of talent that came of age in the era. And now some of the talent is coming back to the studios — and while awards movies aren’t really the business for studios to be in, everybody would like to have it as part of their business.”

Alfonso Cuaron, who directed the big-budget “Gravity,” which was initially set up at Universal and then moved to Warner Bros., said he could not have made the film without a studio to finance the development of special effects needed before he could shoot.

“I don’t think you could do something like this without a major studio,” Cuaron told TheWrap. “Those guys stood behind me all the time. The expression that we use in the film, ‘Houston in the blind,’ is a real expression that they use in space exploration when they don’t have communication and they don’t know if Houston is listening. This was ‘Warner Bros. in the blind,’ because they were investing in all of this stuff, and for a long time they didn’t see anything.

“I’m not saying there were not moments when they got nervous, and I had to deal with all that stuff, but they were fantastic.”

Some of the studio contenders, like “Gravity” and “Saving Mr. Banks,” were made by studios from the start; some, like “Prisoners” and “Rush,” were made independently and then picked up by a major. 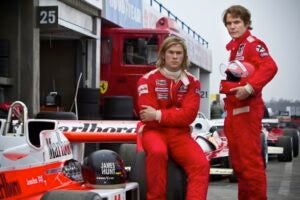 In fact, for “Rush,” the sub-$40 million film was envisioned as a totally indie production, writer-producer Peter Morgan told TheWrap. “There was a very indie vibe to the whole thing,” said Morgan, who said that the decision was made early on to cast an Austrian in the role of Niki Lauda rather than an American movie star, and to shoot on a low budget.

Original director Paul Greengrass, in fact, dropped out after deciding that he didn’t want to make the movie unless he had a $150 million budget, which would have necessitated bringing in a major studio and casting a movie star instead of German actor Daniel Bruhl.

“Paul stepped back, and within 24 hours Ron Howard jumped in and embraced the indie spirit in a way that no one who knows Ron would have predicted,” Morgan said.

Universal later came on board, even though the film was made without studio input, and without a single note from a single executive. “Sometimes notes can be really helpful,” said Morgan. “But in the end, all an audience craves is something different – and you can’t do something different if you’re busy taking the advice of people who are trying to make it the same.”

Also read: Racing Legend Niki Lauda to ‘Rush’ Makers: Don’t Make Me Look Gay and Get Me to the Oscars

But the studio embraced the notes-free, non-studio production, just as other big companies appear to be learning the lesson on which Harvey Weinstein has based his career: The prestige of major awards is something worth embracing, and maybe even pursuing. Not to mention that you can make some extra dollars with the right award-winning drama.

“Studios are set up for straight down-the-middle, mass-market entertainment,” said De Luca. “That’s the nature of the game. For them, the serious dramas have a small strike zone: It has to be the right price, the right material and the right talent.

“But if it’s right, it can pay off for them. The competition for audiences with tentpoles, where the younger audience is distracted by so many other forms of entertainment, is not there with the adult audience.

“The adult audience is not playing ‘Call of Duty’ or ‘Halo.’ And in a way, lately they’ve been easier to get into a theater than the younger audience.”