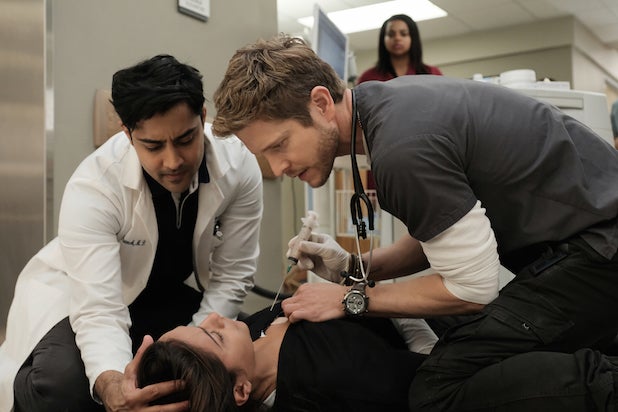 Matt Czuchry has dabbled in the legal world with “The Good Wife” and been a part of a mother-daughter story for the ages with “Gilmore Girls.” But now he’s ready to get his hands dirty in the medical field on Fox’s new show “The Resident.” Seriously, it’s not going to be a pretty picture.

Though Czuchry plays a charming doctor, don’t try and compare the series to “Grey’s Anatomy” — or any other medical drama for that matter — as the actor tells TheWrap this isn’t that kind of show. Not that there’s anything wrong with that.

“The medical genre is beloved and there are so many great stories to be told — and that’s why it’s so popular,” Czuchry told TheWrap during the Television Critics Association press tour earlier this month. “And also, it interconnects us all in terms of health and life and death. I’ve had so many personal experiences with it. So, you have that. But this does take a different peek into the genre. I think it’s slightly grittier. I think it’s slightly more cynical. I think it’s a little bit dirtier. And you kind of ‘pull the curtain back’ — so to speak.”

“For example, the cop genre has been popular for so long, and we kind of saw with the ‘The Shield’ pulling back that curtain,” Czuchry added. “But I don’t think we’ve seen it to that level in the medical genre, in that way. And I think that’s some of what we do — try to give viewers a new look into a beloved genre that’s been around for so long.”

FX’s critically-acclaimed, Michael Chiklis-starring crime drama, which aired for seven seasons from 2002-2008, portrayed corrupt police officers in a way that few shows had done before. “The Resident,” which follows Czuchry’s Dr. Conrad Hawkins during his final years of training, similarly looks to expose the dark side of the hospital industry.

The series is already planning to address some hot button issues in its freshman season, as Czuchry’s co-star Emily VanCamp told TheWrap about an upcoming story line in which her character is sexually harassed by an athlete in the hospital.