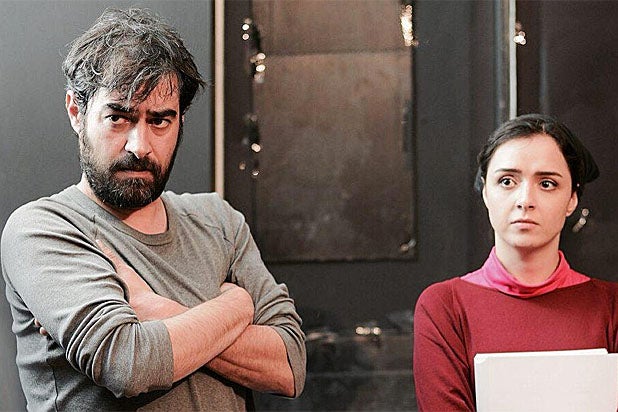 Going into the Cannes Film Festival, Asghar Farhadi‘s “The Salesman” seemed an early favorite to win the gold. Now that the film has screened, we can say for certain that Farhadi absolutely remains a force to reckon with, but you can probably count him out for the Palme d’Or.

“The Salesman” sees the director returning to number of themes and ideas he has explored in his previous films, including male codes of honor, family tensions and the nature of justice. In excavating those themes, he is without rival, and he ably flexes his dramatic muscles here. So why then, was the film received with the faintest whiff of disappointment?

It might have something to do with expectations. Simply put, you know what you’re going to get with a director like Farhadi, and then you get it, and then, well, what else? It’s the same problem that befell the recent films by Woody Allen and the Dardennes brothers — they all consistently deliver good work, but work that is highly coherent in style and theme, so when it stays good without breaching great, it comes as a regret.

And there’s nothing to regret about this Farhadi riff on revenge, a slow burn story of a couple torn apart by a home invasion. Emad (Shahab Hosseini) and Rana (Taraneh Alidoosti) are happily married, living in a temporary pad while theirs is being repaired. The earthquake that starts the film, effectively kicking them out of their apartment, neatly prefigures the next cataclysm that will cut a fissure in their marriage.

That’s when Rana, thinking she is letting in her husband, absent-mindedly allows in a stranger who clearly assaults her, and perhaps does something worse, though Farhadi keeps the entire assault off-screen, leaving that possibility oblique.

Whatever the case may be, the results are the same. Rana is traumatized by the attack, and finds herself processing her trauma in often contradictory ways. An actress, she is no longer able to walk onstage (the film’s title comes from a production of “Death of a Salesman” that both husband and wife are starring in), but does not want to give up her part. She has trouble staying at home, but is even more troubled out in the world.

Perhaps because there’s little he can do to ease her psychic scars, Emad becomes obsessed with finding the perpetrator, and — spoiler alert — he does. Up until that point, the movie keeps slow, deliberate pace, to the point where the first hour can feel a bit mushy around the edges. By the time the third act kicks into gear, however, it tightens like a coil.

Emad, Rana and the perp spend the last half hour or so in an empty apartment, dancing around each other. Though a vengeance riff, it remains a Farhadi film all through, so dancing around each other means a lot of talking about action instead of doing action. And that’s fine – the former playwright is uncommonly gifted in writing third acts, where each line of dialogue and simple gesture are imbued with meaning.

In Farhadi’s world, a simple pause can speak volumes.