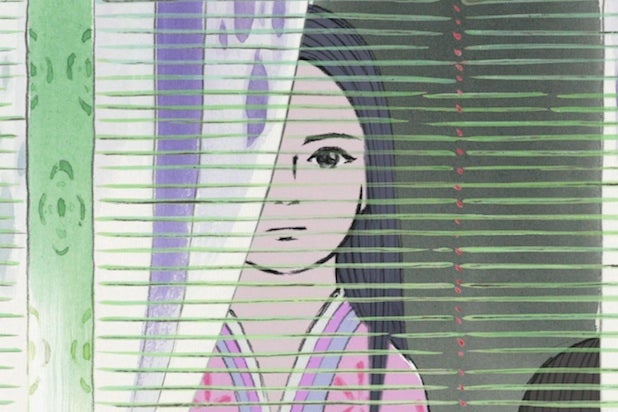 "Tale of the Princess Kaguya"

Civilization has a way of transforming the most fundamental aspects of life into frills and indecencies. Under its oppressive, distortive might, language is deformed into florid flattery, love into empty ceremony, and faces into long-suffering canvases, from which eyebrows are painfully plucked and artificial ones drawn on just because.

Culture, refinement, and sophistication — all the hallmarks of an “advanced” civilization — are put on trial in Isao Takahata’s “The Tale of Princess Kaguya,” an exquisite, hand-drawn marvel and an alternatingly jubilant and heartrending epic pastoral. In a strong year for animation (“Big Hero 6,” “The Boxtrolls,” “The Book of Life,” “How to Train Your Dragon 2,” “The Lego Movie”), it’s an instant Oscar contender.

Based on a Japanese folktale, the latest tour de force from Studio Ghibli encompasses the spectrum of life and emotions, reserving a keen ache for nature and its splendors. You can almost smell the flowers, rendered in confident lines and watercolor pastels, as they thrust their petals out into the world and bloom into storybook blossoms before your eyes.

And there’s more euphoria and exhilaration to come. From the moment that the lowly Bamboo Cutter (voiced by James Caan) discovers the Princess (Chloë Grace Moretz) being birthed by a lotus blossom, he feels blessed by the heavens. He wipes his palms on his pants before reaching out to cradle the yawning, apple-cheeked infant in his hands for the first time, and before long, she grows impatiently fast into a savant at every activity and art (singing, weaving, koto-playing, feminine passivity) thrown her way.

It’s wondrous to watch the enchanted Princess, given a title but not a name, swell instantly into twice her size in the arms of the Bamboo Cutter’s wife (Mary Steenburgen). But the film is more lavish with its brief odes of the miracles of childhood, from the Princess’s first few tumbling crawls to the little girl’s rapturous twirls in nearby forests and fields.

For company, she craves only the adoration of her mother and father and the camaraderie of several rowdy village boys, led by the kindly Sutemaru (Darren Criss), who calls her Lil’ Bamboo for her rapid development into a young woman.

Then fate — or civilization, or womanhood — intercedes. The Bamboo Cutter whisks the Princess to the capital, where he builds her a mansion and buys her a title with wealth begotten from more supernatural discoveries in the woods. Thus begins the beauty treatments, lessons in royal rituals, and long courtships the Princess, newly named Kaguya by a nobleman, unhappily endures out of deference to her father.

Per Lady Sagami’s (Lucy Liu) instruction, Kaguya submits to teeth blackening (blue-blooded women shouldn’t expose their teeth, apparently) and shuts herself off in claustrophobic closets when her many suitors come calling (the upper classes don’t get a peek of their betrothed until the wedding day).

The baroque intricacies of life among the rich and gossipy is ripe for satire, but the film plays it mostly straight, focusing on Kaguya’s dwindling opportunities for quiet rebellion, as well as her father’s and Lady Sagami’s narrow-minded conceptions of female happiness. It’s a tragic and depressing look at princessdom, but Takahata (“Grave of the Fireflies,” “Pom Poko”) wisely resists any quick fix with a dose of girl power.

Instead of the kind of feminist revisionism of traditional fairy tales we’ve had lately from Disney with “Brave,” “Frozen” and “Maleficent,” Takahata ultimately frames his story as a family tale that, especially toward the end, feels both too ethereal to relate to real-life concerns and exceedingly forgiving of patriarchal sins. The proto-anime visual style adds to a sense that the film could be a relic from another era — and its messages could be, too.

It’s when Kaguya’s supernatural roots are revealed that the film’s Japanese origins, and assumption of cultural knowledge on the part of the viewer, interfere with its resolution. A certain familiarity with medieval Japanese folklore seems necessary to understand its nuances. Lacking such knowledge, I still found the ending stalwartly poignant, if also a bit confusing.

Fortunately, the rest of the film doesn’t seem to suffer from such cultural gaps. The natural world it details are brought to wiggling, waking, swirling life, while the capital’s pomp and pageantry are depicted with unexpected dark humor and an undercurrent of sorrow. Looming over both is the moon: a beacon of hope in the night, but an unreliable companion when day breaks.