Meghan McCain, who will be moving on from “The View” on Friday, was absent from the show’s highly anticipated interview with the former president’s niece, Mary Trump, who came on promoting her latest book, “The Reckoning.”

After much discussion on Donald Trump and his followers’ reactions to the Jan. 6 insurrection, the author went on to state that her uncle deserves the backlash and blame he’s receiving for “the necessary deaths of hundreds of thousands of Americans” due to his failure to properly respond to the coronavirus.

“One thing Donald proved is that using racism as a platform was successful, and I think that’s why we see so much strife in this country,” she said. “And we need to continue having the kinds of conversations about race and gender that you have.” 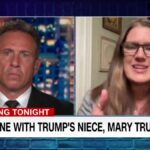 Also Read:
Donald Trump Wouldn’t Put Neck on the Line Even to Save His Kids, Mary Trump Says (Video)

At the very end of her interview, Trump finished by pointing out McCain’s noticeable absence, saying that the commentator did not have the “courage” to talk to her.

“It’s a shame that your colleague didn’t have the courage to come on and have this conversation with me,” Mary Trump continued, referring to McCain. “But I appreciate that you were all willing to take up these very difficult subjects because racism, in my view, is at the heart of everything that’s wrong in 21st century America.”

The co-hosts sat in awkward silence before Whoopi Goldberg concluded the segment and plugged Trump’s book.

This came after the first half of the show, which was spent talking about Kathy Griffin and her lung cancer diagnosis announcement. During the segment, McCain made clear that despite her sorrow for Griffin and hopes for her “speedy recovery,” she dislikes the comedian for the homophobic comments she made about Clay Aiken’s sexuality. 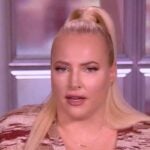 “My issue with Kathy Griffin is, I’m going to name drop Clay Aiken as one of my closest friends in the entire world, he’s [like] my brother. She made very, very, very cruel and homophobic jokes about him before he was out of the closet,” McCain said on Monday’s episode of the talk show. “We have to go back to like 2002, 2003, when that was still acceptable.

She went on to demand an apology from Griffin on Aiken’s behalf, saying that he could’ve become an opioid addict, with the “degree of bullying that happened to him.”

“You can just go on YouTube and see a lot of the jokes that she made about him — and other comedians, but she really led it — so I would love to hear an apology, if she’s doing this kind of soul searching, for what could’ve happened with my good friend. I don’t like her, I’m never gonna like her for all the jokes she made about Clay.” 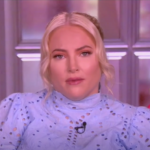 You can watch a clip of Trump’s interview here or above.