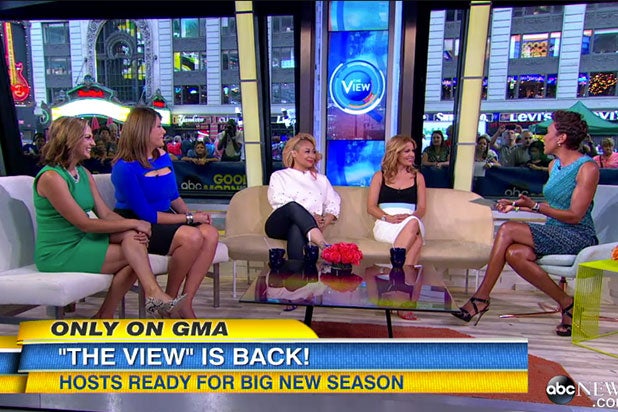 “Fuller House” star Candace Cameron Bure is hoping to hold “healthy” and “respectful” conversations on the new season of “The View.”

“I can’t wait for us to have healthy conversations and respectful conversations,” Bure told “GMA” anchor Robin Roberts. “It’s okay that we all have different points of view — that’s what makes the world go round.”

The segment promoting the new season kicking off the same day showed clips from a previous controversial episode during which Bure and Raven-Symone had a debate about the bakery that refused to sell a wedding cake to a lesbian couple back in July — a topic the former “Cosby Show” kid counts among her favorites to discuss.

“I love social interest pieces, I really love to learn to learn about politics because I am not as in depth as much as the other people on the panel, and I love entertainment because I’ve been in it so long,” she said.

They’re not the only famous faces who will be weighing in on hot topics. ABC previously announced a rotating line-up of contributors, including Sherri Shepherd, Padma Lakshmi, Stacy London, Ana Navarro and Molly Sims.