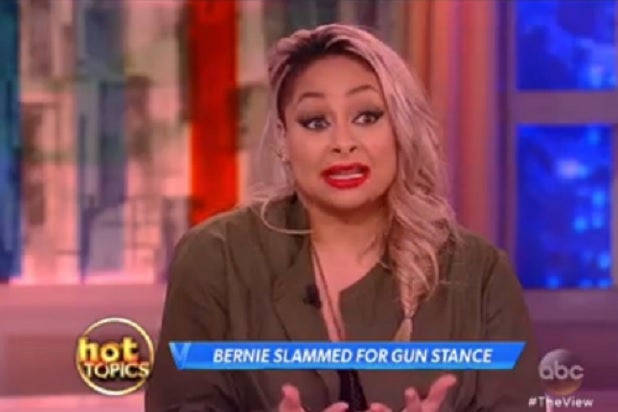 “The View” panelist Raven-Symone made her thoughts known during Thursday’s episode of the ABC talk show, as she and her colleagues discussed presidential candidate Bernie Sanders’ assertion that relatives of the victims in the Sandy Hook Elementary School shooting in 2012 shouldn’t be allowed to sue the gun manufacturers.

Raven-Symone agreed with Sanders — and asserted that the victims’ families should take their complaints to the government instead.

“I don’t think it’s fair for the families to sue the gun manufacturers,” Raven-Symone said. “I think they should talk to the government, because they’re the ones who put it in law that these kinds of guns can be sold.”

The co-host continued, “You need to go to the government and say, ‘The Second Amendment was made at a time when we needed to protect ourselves from whomever’s going to show up at our door for war.’ Now we have all kinds of stuff that we don’t need. We don’t need these guns everywhere, and I have a gun. I don’t need it. I’ve got it.”

Raven-Symone, who said that her gun ownership is a product of her Southern upbringing, added that she did use her gun once in Los Angeles, only to land in hot water because she didn’t have her paperwork in order.

Sitting in as a guest on Thursday’s panel, Jedediah Bila pointed out that the gun used by Sandy Hook shooter Adam Lanza, is “not a military-grade weapon … these are guns that a lot of people I know have to protect themselves, and they feel that a lot of criminals have access to these types of weapons, and they want to have that same right.”

“He got it legally,” Bila replied.

“View” honcho Whoopi Goldberg chimed in that she wished the National Rifle Association would be more compromising in the gun-control debate.

“I just feel anything that will help us explain to people why background checks are important, why all those things are important ..I wish the NRA would get on board with stuff like this, because it makes it so hard when one group says, ‘We’re not gonna talk to you about anything,'” Goldberg offered. “These are parents who lost, and children who lost their parents, and they’re trying to find a way to balance this all out, and I think the NRA could be helpful.”

Also Read: 'The View' Tears Into 'Bias' Against Idea of Female President (Video)

“But you know what, Whoopi? After that Sandy Hook massacre, the NRA did not step up and try to be helpful. I really have no faith that they ever will,” Behar said.

“I know that there are rational people in the NRA,” Goldberg responded.

Arguably the raunchiest answer in game show history came on a 1977 episode of "The Newlywed Game," which has since become an urban legend.
View In Gallery
x
Looks like you're enjoying reading