Goodness; things got a little touchy-feely on Thursday’s episode of “The View.”

Panelist Raven-Symoné fully expressed her puppy love for Donny Osmond — a guest on the episode — during Thursday’s opening segment, fondly recalling her previous work experience with the entertainer.

“You know, I love me some Donny Osmond,” Raven-Symoné, rocking a fire-orange coiffure to match her passions, enthused, “We did a movie together and music together, and I just felt some kind of connection with this man. I love him.”

The declaration of love was but a mere bit of verbal foreplay, however.

Also Read: 'The View': Raven-Symone Shoots Down the Second Amendment: 'We Don't Need These Guns Everywhere'

“He’s such a genuinely nice person; he hasn’t been affected,” Raven-Symoné opined, before letting loose with a climactic, “There’s like this, ‘Ohhhh….'”

“My God, your bottle caps are rising,” her “View” cohort Whoopi Goldberg declared.

At which point Raven-Symoné placed hands to breasts in a presumed effort to, uh, flatten her bottle caps. Or maybe give them an extra rise.

The saucy talk didn’t stop there. “The View” crew moved on to the topic of open marriages, which recent research suggests are an unwise idea.

“I don’t know if it could work for me; like, the thought of my husband with another woman makes me angry right now,” guest panelist Sunny Hostin declared. “And I remember prosecuting all these cases of crimes of passion when there’s a lovers triangle, so I don’t know.”

Raven-Symoné, perhaps still heated up from thoughts of Donny Osmond, declared herself in favor of such arrangements.

“I don’t know, I think it’s dangerous to blanket, ‘This is bad,'” she declared. “There’s too many different types of people in the world. I personally would like to try an open marriage, because I get a kick out of it.”

Also Read: 'The View': Raven-Symone Vows to Leave US 'If Any Republican Gets Nominated'

Joy Behar offered her own practical objection to open marriages.

Which left Goldberg to offer her own nuanced thoughts on the difficulties of polyamory. 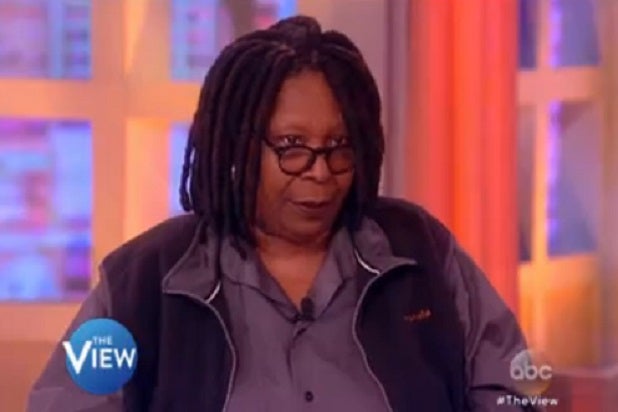 “Most people get all freaked out because they don’t trust their partner,” Goldberg observed. “And when it comes to sex, you know … Sometimes, they’re like, ‘Look, I’m not gonna give you all that. That’s not for me. Too old, too dry, not playing.'”

After which, Goldberg asked, “Too much information?”

Probably, Whoopi. But that seemed to be the order of the day.