Whoopi Goldberg took a moment on Tuesday’s episode of “The View” to issue a larger apology for her comments about the Holocaust on Monday’s show, in which she said it wasn’t about race.

To kick off the morning’s discussion, Whoopi noted that she “misspoke” on Monday, and wanted to expand on her apology on Twitter, so fans could hear it directly from her. The moderator then thanked those who corrected her, and explained why what she said was incorrect.

“I said something that I feel a responsibility for not leaving unexamined because my words upset so many people, which was never my intention,” Whoopi said. “And I understand why now, and for that, I am deeply, deeply grateful because the information I got was really helpful and helped me understand some different things.” 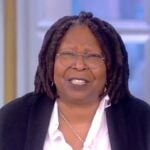 Also Read:
Whoopi Goldberg Apologizes for Saying Holocaust Not About Race: ‘I’m Sorry for the Hurt I Have Caused’

She added that “Words matter and mine are no exception. I regret my comments, as I said, and I stand corrected. I also stand with the Jewish people, as they know and y’all know because I’ve always done that.”

The hosts then welcomed Jonathan Greenblatt, author of “It Could Happen Here” and CEO of the Anti-Defamation League to the show, to further educate viewers on the Holocaust and anti-semitism, noting that it’s an important conversation to have, and that needs to keep being had.

You can watch Whoopi’s full apology in the video above.