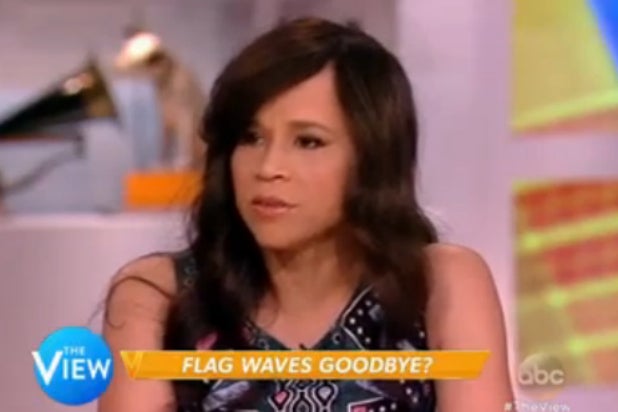 The women of “The View” took a united stand Tuesday over the issue of the Confederate flag still being flown at the South Carolina state capitol building, despite last week’s Charleston church massacre.

The panelists praised South Carolina Governor Nikki Hailey, the state’s Senator Lindsey Graham and Walmart corporation, for publicly calling for the flag to finally be retired. Rosie Perez was particularly vocal about the situation on the ABC daytime talker.

“I think it is really sad that it took nine beautiful lives to make people wake up,” Perez stated. “That said, I’m glad that their eyes finally are open, because it is time [to take down the flag]. Unfortunately, there are some people not behind it, specifically Ted Cruz.”

“They won’t condemn the flag because they… don’t want to alienate certain voters,” she said about Cruz and other presidential candidates who have not demanded that the flag be removed.

Perez then praised Senator John McCain for admitting recently that he dodged the same issue while running for president in 2000 for political purposes, in turn compromising his principals.

“Congratulations, John McCain,” Perez said. “That’s what a stand-up guy does. I wish those that are running for office now would do the same.”

Meanwhile, the panel’s resident Republican Nicolle Wallace defended Cruz a bit, reminding Perez that he actually said he believes it to be a state issue. (It should be noted that Wallace is in favor of the flag only existing in museums at this point, she just wanted to clarify Cruz’s statement.)

“I don’t think that the issue of civil rights is a state issue, I think it’s a nation issue,” Perez expressed, getting applause from the show’s in studio audience.

“I believe the flag’s coming down,” Wallace concluded.