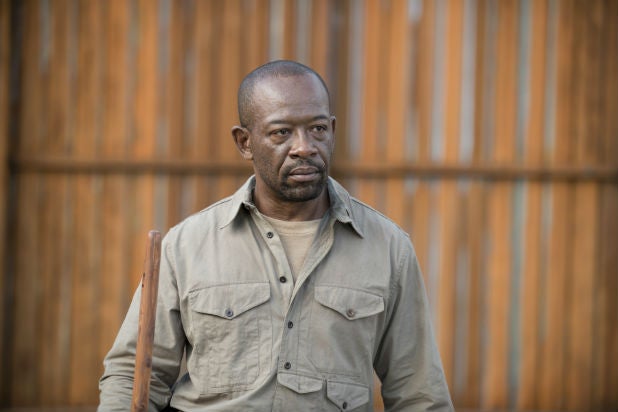 (Spoiler alert: Please do not read on if you have not watched Sunday’s episode of “The Walking Dead”)

Just when you thought it was safe to live in Alexandria …

Sunday’s episode of “The Walking Dead” reminded fans why you can never get too comfortable with AMC’s hit zombie-apocalypse drama. As soon as things seem safe is the moment things tend to go off the rails.

Episode one of season six ended with Rick, Michonne and Morgan trying to lead a massive herd of walkers away from Alexandria, when a mysterious air horn coming from the walled-in community causes the whole plan to go awry.

Episode two takes place in Alexandria at the same time that Rick is trying to lead the herd away. The community is still reeling from Pete killing Reg and Rick’s subsequent execution of Pete. No one has a chance to mourn for long, however, as a group of psychopaths known as the Wolves infiltrate the walls and begin killing citizens at random.

The Wolves then smash an 18-wheeler into Alexandria’s walls, with the crash resulting in the truck’s air horn getting switched on.

Carol, who has been very good at hiding her true bad-assery since the group arrived in Alexandria, returns to action in fine form as she single-handedly begins taking out Wolves throughout the community.

Morgan, who was helping Rick lead the herd away, gets back to Alexandria in time to help, but he and Carol quarrel about whether or not to kill members of the Wolves. Carol shows no mercy, but Morgan gives several of them a chance to escape with their lives.

Carl recruits Enid, the girl with whom he’s had a budding romance, to help defend his baby sister Judith. He also saves Pete’s son Ron from an attacking Wolf. But rather than take cover with Carl and Enid, Ron runs, as he hates Rick for what he did to his father.

Jessie — Ron’s mother and Pete’s wife — told Rick in the premiere that she was willing to fight to survive. She proves it when a Wolf breaks into her house and she is forced to stab the woman to death with a pair of scissors.

When the attack is over, Carl is heartbroken to see that Enid has fled Alexandria. Carol also seems shaken up by all the people she had to kill. Morgan is surveying the destruction in one of the houses when a Wolf attacks him. The episode ends with Morgan seemingly killing the man with his staff.