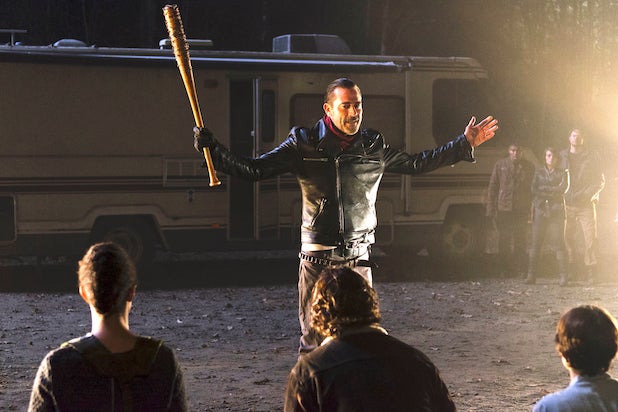 (Spoiler alert: Do not keep reading if you haven’t seen the Season 6 finale of “The Walking Dead”)

Speculation about whom Negan (Jeffrey Dean Morgan) killed during the Season 6 finale of “The Walking Dead” is showing no signs of slowing down — but it turns out slowing down the audio from the last scene may hold some answers.

A fan has posted a YouTube video that isolates the dialogue in the final scene of the episode that notoriously did not reveal which member of Rick’s group had a bloody face-to-face meeting with Lucille, Negan’s barbed wire wrapped baseball bat.

One more warning: Comics spoilers after the jump.

In the comics, it is Glenn who suffers the gruesome fate at Negan’s hands, and this audio would have you believe the same holds true for the show. But given that Glenn had a death scare earlier in Season 6, some have speculated that the showrunners would change things up for the finale.

Regardless, fans were none too pleased when the episode was over and the victim was not revealed. Furor over the cliffhanger led many to call the ending “unnecessary” and a “let down.”

But series star Andrew Lincoln defended the choice to end the episode in that way. “People are well within their rights to feel whatever they want,” Lincoln told TheWrap. “If they feel robbed, it’s a completely valid thing. But a guttural reaction, an upset, that’s the point of drama. I don’t go to a theater or movie and not feel things. I want to feel things.”