Opening with a shot of a man literally staring into the void, Terry Gilliam‘s “The Zero Theorem” takes huge philosophical ideas and turns them into a grand sci-fi adventure.

Although it’s full of stylistic hallmarks we’ve come to expect from Gilliam — layered realities, overbearing technology, institutional paranoia and of course, quirky romance – it feels like a personal journey into his beliefs, as it stares into the divide between reason and faith.

Christoph Waltz (“Django Unchained”) plays Qohen, a hairless hypochondriac who crunches “entities” for a vast, faceless corporation. While waiting for a phone call that will literally give his life meaning, Management (Matt Damon) offers him a unique challenge in exchange for the privilege of working from home: help solve a complicated, mysterious equation called the Zero Theorem.

After he meets a young woman named Bainsley (Melanie Thierry) who is weirdly charmed by his determination to isolate himself, the company sends a teenager named Bob (Lucas Hedges) to help get his work back on schedule. Soon, he is forced to decide what’s more important: his new friends or his work, the latter of which just might earn him that phone call, if it doesn’t drive him crazy first. 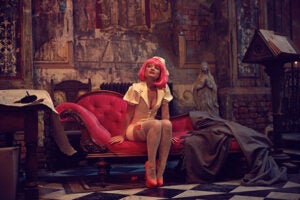 From the fish-eye lenses that isolate Qohen even in his own rundown apartment, to the wall of industrial noise Qohen is greeted with whenever he opens his front door, Gilliam finds obvious but effective ways to make the audience identify with his protagonist’s view of the world around him.

Those choices don’t overshadow the film’s main idea – figuring out what gives human life purpose – but they do turn Qohen’s introspection into action and make his internal struggle feel like a fascinating quest.

Waltz, shaved bare (even of eyebrows) and constantly slumped like a bullied kid always expecting to get punched, imbues Qohen’s mannerisms with an odd charm and makes his desperation oddly appealing — even hopeful. Thierry’s Bainsley sometimes feels like more of a plot device than a full-fledged character, but the actress effectively shows how the seduction of Qohen unexpectedly makes her feel less empty inside.

Meanwhile, as Bob, a cynical teen prodigy brought in to help solve the Zero Theorem, Lucas Hedges (“Moonrise Kingdom”) not only gives a very isolated character someone to talk to, but eventually points out how Qohen’s plan to shut himself off from the rest of the world is not an especially effective way to find his place in it.

Like most life lessons, the answers to Qohen’s problems are hidden in plain sight. But the fact that they’re there at all marks the difference between a film with a nihilistic attitude about human existence, and one that believes in the idea that there are many reasons to live, both great and small. Like a great professor who makes complicated ideas easy to understand, and more importantly, fun to think about, Gilliam boils down basic questions about human existence to a series of weirdly relatable physical conflicts, which is why “The Zero Theorem” dances on the edge of nothingness, and manages to find something incredibly powerful to say.