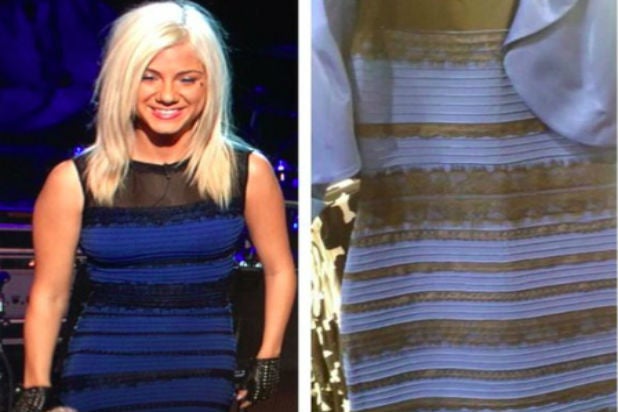 Jackie “Jax” Cole, one of the final eight girls on the Fox singing competition, on Thursday’s episode wore the dress that blew up the Internet, but this time it was definitely blue and black — oh wait, now it looks white and gold.

Host Ryan Seacrest is still hung up on the dress dilemma and jumped on stage after Cole’s performance of “Ain’t No Mountain High” to snap a photo of the outfit designed by British clothing retailer Roman Originals.

“I see blue and black,” he initially said, but then we he posted it on Twitter and he changed his mind again.

“Even with @jax wearing the actual dress I still see white/gold in the pic #idol,” he tweeted.

even with @jax wearing the actual dress I still see white/gold in the pic #idolpic.twitter.com/yWYwCb4Kjl

Judges Jennifer Lopez, Harry Connick Jr. and Keith Urban weren’t blown away by Cole’s performance — so instead they focused their attention on her chameleon-like dress.

Lopez decided it was blue and black, but the guys had fun with the argument calling it red and pink, while Connick Jr. was more interested in mocking Seacrest. “I see a hot guy holding a cell phone,” he said.

As TheWrap previously reported, Roman Originals sold out of the dress within an hour after it became an overnight sensation. The company had been thinking of doing a gold and white version as it does come in other colors, but announced Saturday that it will make only one and then auction the dress off for the U.K. charity, Comic Relief.