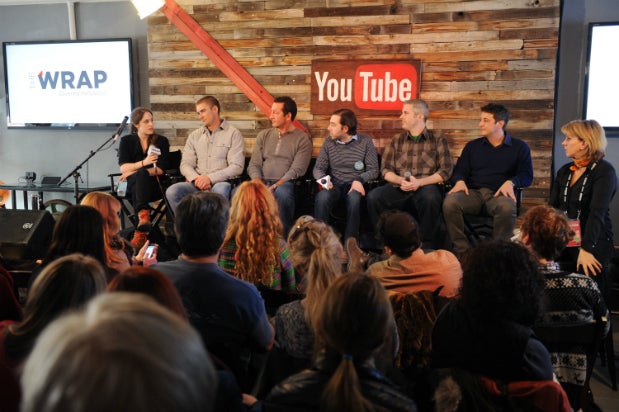 In the clutter of the digital age, having a hook for your movie is as important as its quality,  a panel of agents, producers and filmmakers said Monday during TheWrap industry panel at the Sundance Film Festival.

The panelists agreed that too many independent movies are getting made, which means that quality alone is not enough.

“I sold a movie a few years ago that was the biggest piece of shit I’ve ever seen, but I had 11 offers the next day,” Jay Cohen of the Gersh Agency, an expert in indie financing, told the crowd. “Quality is great, but a hook is even better.”

Technology has made it easier than ever to make a movie and send it out into the world. Cheaper cameras have made production accessible to the masses, and YouTube has given everyone an outlet for their creativity.

Yet the surge in quantity makes it even harder to break through the clutter, which was the subject of the panel. Panelists included: Indiegogo’s Marc Hofstatter, producers Matthew Rhodes and Alicia Van Couvering, YouTube’s Derek Callow, director Cary Murnion and Cohen. TheWrap CEO and editor-in-chief Sharon Waxman moderated the panel, which YouTube sponsored. UCLA’s School of Theater, Film and Television were partners, with Dean Teri Schwartz providing the introduction.

Furthering the discussion, Rhodes argued filmmakers and producers must identify an audience for a movie before making it.

“So many people who make a movie don’t think about it and then have no home for their picture,” Rhodes said. “You need to take a step back and find out who is your audience and find out what is the best thing about this movie.”

Though technological innovations created this morass for filmmakers, innovations such as crowdfunding, YouTube and Twitter make it easier to find that audience than ever before. Hofstatter cited Freddie Wong, a film-school graduate who used his massive YouTube following to raise money for his show “Video Game High School.” In building a personal brand, Wong ensured that anything he makes will reach a sizable, passionate audience.

“He has built this community through digital and YouTube,” YouTube’s Derek Callow said. “As he continues through his career, those people are following him.”

The challenge for Wong and his fellow YouTube stars has been monetizing their followers, but they still tantalize Hollywood with their social savvy and passionate fan bases. Social media has proven a powerful driver at the box office, as actors like Kevin Hart and The Rock use their accounts to shepherd people to the movie theater.

Focus Features is hoping Zach Braff has that same power. It just acquired Braff’s “Wish I Was Here,” a dramedy he co-wrote, starred in and directed that premiered at Sundance. Like Wong, Braff used his online following to raise money for the movie, ensuring a degree of creative freedom he feared he would not receive with a traditional financier.

The success of folks like Braff and Wong deludes executives into thinking Facebook, YouTube Twitter are a panacea. Anyone who films something with the goal of making it “go viral” is likely to fail.

Not everyone on the panel is ready to brand their movies. Van Couvering, whose “Happy Christmas” premiered at this year’s festival, argued that you should only trust your own taste. Once you start to think about a potential audience, you lose any sense of originality.

“Would I spend $10 of my own money to see it? The answer is almost always no,” Van Couvering said. “If you are just backing into an audience you are repeating what came before and that’s where people lose all their money.”