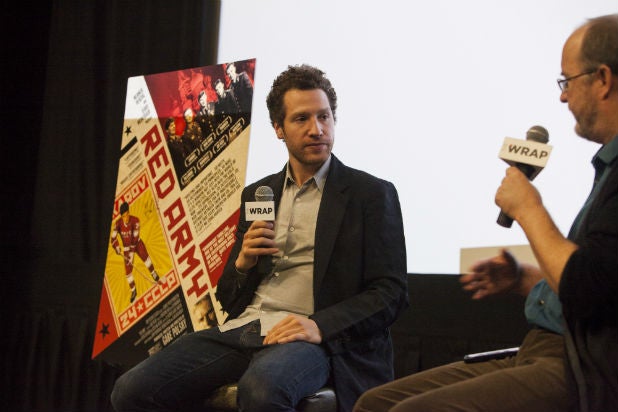 Director Gabe Polsky will be the first to admit he never set out to make a hockey movie. Polsky’s documentary, “Red Army,” is about the rise and fall of the Cold War, yet it’s jam-packed with some of the greatest moments in hockey history.

“I realized this was a big deal,” Polsky told the audience after TheWrap Awards Season Screening Series presentation of the film at iPic Theaters in Westwood, California, on Tuesday, moderated by TheWrap Awards Editor Steve Pond. “I was able to use hockey as a window to a much bigger story.”

“Red Army” shines a light on the link between sports and politics. The film takes a hard look at the ruthless tactics of the Soviet era and team coach Viktor Tikhonov in particular.

Players were sent to grueling training camps in the ’70s and ’80s and away from their families for months at a time. When one of the players asks Tikhonov to go home because his father was on his deathbed, the coach flatly refuses.

Their unconventional training program borrowed from dance, chess, literature and art, resulting in a never-before-seen symmetry between the players.

But getting Fetisov to participate took some convincing. “At first, he didn’t want to meet with me,” Polsky said. “Finally, he agreed to a 15-minute interview.”

Those 15 minutes turned into five hours. But it wasn’t until the movie was screened at this year’s Cannes Film Festival that Fetisov was finally onboard.

“When I first showed Slava the movie, he had no reaction, a complete poker face. I thought, ‘This is terrible!'” Polsky told the audience. “But then, after he saw the reaction and the standing ovation, he was very supportive.”

“Red Army,” traces the growth of the Soviet game from its spectacular rise to its devastating fall.

Fetisov talks about his career and the bond he shared with other members of the “Russian Five”: defense partner Alexei Kasatonov and forwards Sergei Makarov, Igor Larionov and Vladimir Krutov.

“We were closer than brothers,” Fetisov says in the movie.

Also read: TheWrap Screening Series: ‘Black or White’s’ Kevin Costner on Race Relations – ‘We Have to Move Past Our History’ (Video)

One of the most gripping parts of the film is when Polsky shows footage of the game between USA and the Soviet Union during the 1980 Lake Placid Olympic Games, also known as “The Miracle on Ice.” The United States national team defeated the Soviet Union national team, which had won six of the seven previous Olympic games.

Even today, Fetisov can’t seem to talk about it. By the end, he has tears in his eyes.

The Russian team went on to win the 1984 Sarajevo Olympics, advancing the puck from stick to stick with incredible agility and accuracy.

All that came crashing down in the late ’80s and early ’90s, as many of the players defected to the West during perestroika and Mikhail Gorbachev’s glasnost policy reform.

But in a bizarre twist of fate, all members of “The Russian Five” ended up playing for the Detroit Red Wings, helping the team win the 1997 Stanley Cup Finals.

“You’ll never see this kind of hockey again,” Polsky said. “At least not for a very long time.”