NBC is tops in the key 18-49 demo. Fox is fourth. After a rough period for dramas, “The Blacklist,” “S.H.I.E.L.D.” and “Sleepy Hollow” are all going strong. And Michael J. Fox, one of the most revered figures in show businesses, isn’t yet getting his due.

Of course some things are consistent. NBC’s “Sunday Night Football” is still TV’s biggest show. But that’s one of the few certainties in a fall season that’s off to a wonderfully unpredictable start. Here’s our network-by-network rundown of the season as it stands so far, before the “Walking Dead” zombies return Sunday, perhaps to once again embarrass the broadcast world with their superior numbers.

Don’t worry, CW fans, we haven’t forgotten you: The network is just starting to roll out its shows, so we’ll cover them later. For now, here’s TheWrap‘s read on ABC, CBS, Fox and NBC.

ABC ranks third behind NBC and Fox overall with a 2.3 rating in the key 18-49 demographic as of Thursday, the latest day for which numbers are available. It’s up 5 percent from this time last year after ending last season in fourth place. It has the distinction of having the fall’s highest drama debut with “Agents of S.H.I.E.L.D.” and first cancellation with “Lucky 7” – a show that shared Tuesdays with “S.H.I.E.L.D.” That underscores a problem for ABC: It had hoped to build Tuesdays around the Marvel spy series, but “S.H.I.E.L.D.” and the rest of the Tuesday lineup fell in Week 2. 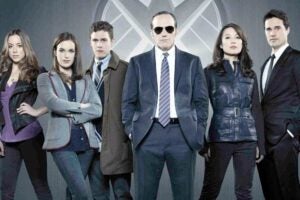 Ratings: How good were the “S.H.I.E.L.D.” numbers? The best in four years in the key demo. But “Lucky 7” lost 38 percent in its second week, even after the network’s lowest drama premiere in its history. The good news is that ABC still has “Modern Family” – TV’s second biggest comedy – and returning dramas including “Scandal,” which just had its best premiere ever. “The Goldbergs” is doing fine, and “Super Fun Night” had a big premiere. And returning shows “Modern Family,” “Grey’s Anatomy,” and “Once Upon a Time” also delivered solid numbers.

Chatter: “S.H.I.E.L.D.” does well socially, with GetGlue and Facebook both ranking it No. 1 last week. “Once Upon a Time,” “Modern Family” and “Grey’s Anatomy” also rank high in social interaction, as does “The Goldbergs” among new shows. Critically, reviewers were excited about “Revenge” returning to form under a showrunner. The new drama “Betrayal” got poor reviews to go with its poor ratings, and Rebel Wilson‘s “Super Fun Night” has been getting decidedly mixed reviews.

Wrap Forecast: “Betrayal” better watch its back. We see it going the way of “Lucky 7” very soon, and the Sofia Vergara-produced crime drama “Killer Women” perhaps moving up from midseason to take its place. We doubt “Neighbors” will survive its new digs on Friday nights, but we didn’t expect it to survive its first season, either. 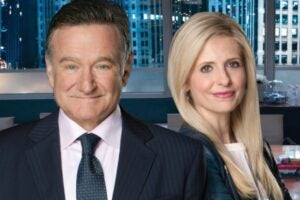 The network, which has been tops in total viewers for years, also ended up winning in the 18-49 demo last season as ratings fell all around. As of Thursday, it was down 4 percent from this time last year, earning a 2.4 in the demo and landing in second place to NBC. CBS ordered only nine new shows for this season, fewer than NBC, ABC or Fox. While the Robin Williams vehicle “The Crazy Ones” fared well, “We Are Men” has been distressing.

Ratings: “The Crazy Ones” came out of the gate strong, drawing a very respectable 4.0 rating and 15.6 million total viewers – the most of any show this season. A 26 percent drop in Week 2 suggests curiosity over Williams’ return to TV might have boosted the premiere. In its debut, another Thursday comedy, “The Millers,” scored a solid 3.2. But “We Are Men” premiered to a 2.0/5 — the network’s lowest-rated in-season comedy premiere ever. CBS is known for high expectations, and can’t be very happy with the heavily hyped “Hostages,” which premiered to a soft 1.8, and dropped off in it second week.  It’s not faring well in head-to-head competition with NBC’s “The Blacklist” on Mondays.

Chatter: Reviews for “The Crazy Ones” have generally ranged from lukewarm to negative. Reviews for “The Millers” have also been less than glowing, because some critics just can’t appreciate jokes about flatulence. “Mom,” Chuck Lorre’s latest addition to CBS’s roster, has done well with the critics, at least compared to Fox’s “Dads,” which has a similar hook.

Wrap Forecast: Don’t get too attached to “We Are Men.” But with a strong lead-in from “The Big Bang Theory,” TV’s biggest comedy, “The Crazy Ones” and “The Millers” should have time to iron out some wrinkles. Or, in the case of “The Millers,” time to clear the air. 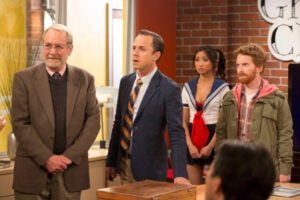 Here’s the old order: CBS rules total viewers with its lock on older audiences, and Fox rules 18-49 thanks to “American Idol.” Thanks to a weakening appetite for all singing shows last season, CBS was able to beat Fox among the young as well as the old, winning both the demo and total viewers. Worse, Fox is starting out this season in fourth place: It is down 12 percent in the demo for a 2.2 since the official start of the season. But that number is a bit misleading, because Fox opted to launch some of its biggest shows – including “Sleepy Hollow” – a week before the official start. The scheduling is just one way entertainment chief Kevin Reilly is shaking up the way his network does business: He’s also debuting one of its most-anticipated shows, “24: Live Another Day,” at the end of the traditional season. Networks tend to be at their best when they take big chances.

Ratings: “Sleepy Hollow” is performing well, and Fox notes that it’s a big gainer in DVR viewing. Reilly has cast a major vote of confidence by renewing the show for a second, 13-episode season. That means viewers who might have hesitated to get invested can afford to do so now. Fox has also already renewed “Bob’s Burgers” for another season, and “The Simpsons” for a record-setting 26th. Its new Tuesday night shows aren’t doing well, however: Both “Dads” and “Brooklyn Nine-Nine” were down in their second week, to a 1.3 and 1.4, respectively.

Chatter: Blame “Dads.” Last week, J.R. Havlan’s “Writer’s Bloc” podcast featured three “Daily Show” writers, including Havlan, rating the new fall comedies. They rated “Dads” the worst and “Brooklyn” the best. “Dads” is weak, they explained, because there’s too much over-explaining and setup, and not enough variety among the characters. “Brooklyn” is good because it handles exposition smoothly and gets to funny, diverse people telling different kinds of jokes. (All three writers though it had the single best joke of the season — but couldn’t agree on which one.) Critics are mostly united in despising “Dads” and admiring “Brooklyn.”

Wrap Forecast: Given its bad reviews and soft ratings, the decision to kill “Dads” would seem easy – except that it is produced by Seth MacFarlane, whose “Family Guy” and its offshoots have been great for the network. How about reshuffling Tuesdays so that “Dads” no longer leads off at 8? Put the strong-performing “New Girl” first, followed by “Mindy,” whose smart mentality would glide right into “Brooklyn” at 9. Then “Dads” can go last at 9:30, where it won’t drag down the rest of a good lineup. 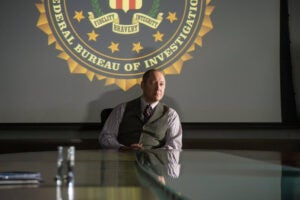 The network is off to the best start this fall, and is on track to win the first two weeks of the season. As of Thursday it had a 3.0, up 7 percent. But NBC started strong last season too, and eventually ended up in third place. It is strongest on Mondays, when “The Voice” is going strong and James Spader‘s “The Blacklist” held almost all of its large audience in its second week. Thursdays are more troublesome. New Sean Hayes and Michael J. Fox comedies can’t gain a foothold against “The Big Bang Theory” and Robin Williams‘ new “Crazy Ones.”

Ratings: “The Blacklist” retention is promising, but the weak debut for “Sean Saves the World” isn’t. Neither was the debut for “Welcome to the Family,” which was the worst ever for an NBC Thursday fall comedy. Meanwhile, NBC’s biggest hit of last season, “Revolution,” is down dramatically in its new Wednesday timeslot without its old lead-in from “The Voice.” That lead-in now belongs to “The Blacklist.” NBC entertainment chief Bob Greenblatt expressed his confidence in the show last week by ordering a full season.

Chatter: Critics have said especially nice things about “The Blacklist” and “The Michael J. Fox” show. There’s also some good buzz about Alfonso Cuaron and J.J. Abrams’s “Believe,” expected in midseason. Even the network’s in-house critic, Jay Leno, hasn’t made too many jokes lately about the network getting topped by Telemundo.

Wrap Forecast: Expect swift cancellations for “Welcome to the Family” and “Ironside,” which also had a weak debut. Fox’s ratings may not be great, but he’s built on his lead-ins for the last two weeks. Maybe NBC should move him to 8 and “Sean” to 8:30, leaving “Parks and Rec” to go up against Williams at 9. Yes, that would mean forcing Fox to do battle with “Big Bang,” TV’s biggest comedy. But someone has to do it.. NBC has already ordered a full season of “Fox” and pledged to keep it on the air. If Fox could save Thursdays, he would further affirm his TV sainthood.

For the record: A previous version of this post misidentified NBC’s “Welcome to the Family”