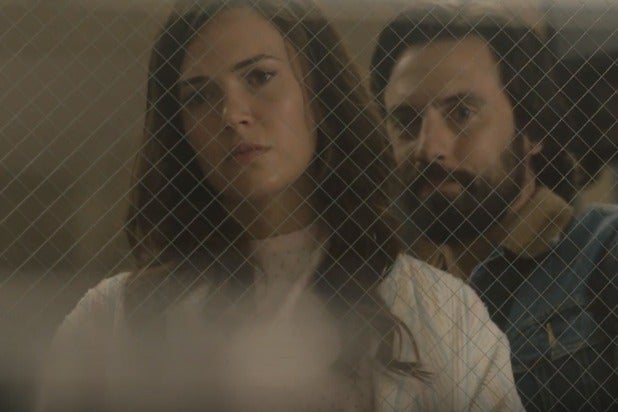 (Warning: This story contains spoilers for Tuesday’s Season 2 premiere of “This Is Us“)

“This Is Us” is back for Season 2, and fans are right to assume that they’ll want to stock up on Kleenex.

Tuesday’s episode closed with Jack (Milo Ventimiglia) confessing to wife Rebecca (Mandy Moore) about his ongoing battle with alcoholism. This was then followed by a flash-forward showing a mournful Rebecca driving up to their burned-out house, suggesting that a fire is the long-debated cause of Jack’s demise.

Mandy Moore, who plays matriarch Rebecca on the hit NBC drama, told TheWrap that big answers are coming soon about the nature of Jack’s death, but that fans might wish that the plot twists could be delayed.

“It’s pretty unbelievably tragic,” Moore said. As to when fans will learn more about the pivotal death, the actress added, “I think it will be answered sooner rather than later.”

Many “This Is Us” viewers have had a tough time accepting Miguel (Jon Huertas) as Rebecca’s new husband, given that Miguel was once Jack’s best friend. Indeed, tonight’s episode showed Jack crashing with Miguel amid a tough fight with Rebecca.

As Moore pointed out to TheWrap, fans’ difficulty in trusting Miguel is not lost on series creator Dan Fogelman or the rest of the writing staff.

“Dan said that the biggest challenge they have is getting people to fall in love with Miguel and accept their relationship,” Moore said. “I don’t know if that will be this season, or if that will be explored next season.”

Also Read: 'This Is Us': Sylvester Stallone to Guest Star as 'Father Figure'

The “License to Wed” star said she doesn’t know exactly how — or when — Rebecca and Miguel first got together. But she likes to assume the best about her character.

“I’ve had my own theory, and I’ve obviously had to operate from a place of knowing, and it may be drastically different from what Dan has in mind, but I don’t think so,” Moore explained. “I’m playing it as there was certainly nothing nefarious going on: They didn’t get together while Jack was alive, and there was no cheating. None of that. No one stole anyone.”

Fogelman previously told TheWrap that a “big piece of the puzzle” in the mystery of Jack’s death would be revealed in the Season 2 premiere.