Advocacy documentaries usually save the “save-the-world” spiel for their closing credit, but “Time to Choose” gets it out of the way up front. No sooner have the lights dimmed than an opening title lets us know, “We can stop climate change.” Would you like to know more?

It’s understandable that Charles Ferguson, who also directed “No End in Sight” and the Oscar-winning “Inside Job,” wants to keep our hopes up. Climate change is a daunting subject, because of not only the scope of the problem but the direness of the forecasts. Scientists have been ringing the alarm bell for years, many for decades, but just as we drown the fear of our own death in the juices of a double cheeseburger, so we’ve maintained (and even increased) our addiction to fossil fuels and somehow managed to politicize an issue that ought to be as nonpartisan as it gets.

Ferguson wants us to be afraid, but not to despair. So “Time to Choose” shifts back and forth between delineating the severity of the problem and offering solutions to it. An urban planner warns that if the new cities China is building to house a population equivalent to the United States are laid out according to the same energy-inefficient principles as, say, Beijing, the earth is “pretty much doomed.” But if they’re done the right way, emphasizing public transit and public space, favoring electrical power over gas and coal, they can be shining examples to the rest of the world. And doing that, he says, could be “easy.”

Over and over, “Time to Choose” stresses that the world can be saved without great sacrifice. We may have to change the way we live, but we’ll gain more than we lose. Transitioning to a plant-based diet will not only increase individual life expectancy but stem the wasteful deforestation of land to make room for livestock to graze. Electric cars aren’t just more efficient: They’re faster than a Ferrari and, so we’re told, “cool.” Solar and wind power aren’t just less harmful to the environment, they’re also cheaper than fossil fuels, or at least they’re getting there soon.

Much, or even all, of this may be true. But unless you’re watching at home and pausing every few seconds to fact-check, the effectiveness of an informational documentary rests on how much of a feeling of trust it conveys. The claims that “Time to Choose” makes seem almost too good to be true. But it’s with the people who are making them that the movie really runs into trouble. 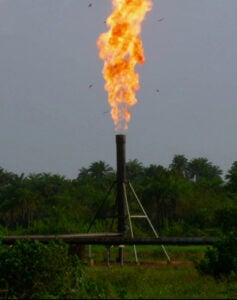 Ferguson is on solid ground when it comes to documenting environmental and economic depredation, whether he’s talking to an activist in Nigeria, where oil companies burn off billions of dollars worth of excess gas rather than sell it to citizens at too low a price, or the residents of Boone County, West Virginia, where mountaintop removal mining has polluted the drinking water and increased the incidence of cancer. But when it’s time to explain how we turn all this around, Ferguson’s messengers of hope too often take the form of CEOs whose rosy predictions sound an awful lot like a pitch to prospective investors. If you walked into a screening midway, you might think you’d wandered into a sales conference by accident.

To its credit, “Time to Change” travels around the world in search of answers, and it emphasizes that there can be no meaningful battle against climate change without breaking up petrostates and corrupt regimes that allow energy companies to run rampant over the globe. But no matter where Ferguson goes, he finds a way to sit someone in a chair and point a camera at them, resulting in a movie whose stultifying dullness works against the urgency of its message. Imagine “An Inconvenient Truth” with no Al Gore, or a Michael Moore movie with no Michael Moore. Oscar Isaac‘s narration is pleasant enough, but it doesn’t give the movie a personality.

The reason Gore put himself at the center of “An Inconvenient Truth” is that he saw climate change as a fundamentally political problem, in that the biggest hurdle was mustering the will of the world’s people to take it on en masse. “Time to Choose” suggests that technology will do it for us, that in a few years, given the right government subsidies and medium-range planning, the benefits of this greener, more efficient, even cheaper tech will make the transition obvious once the ball gets rolling. But even if that’s so, there’s tremendous inertia, and worse, to overcome, and it’s hard to see a movie like “Time to Choose” getting the job done.

Perhaps the scariest thing about it is the realization that if the fate of the world depends on well-meaning issue docs, then we really are doomed.