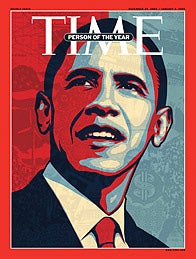 Time editor Richard Stengel appeared on the “Today” show Monday to tease the magazine’s most marketable franchise: its Person of the Year issue.

The magazine will unveil its choice of Person of the Year on the “Today” show Wednesday.

Between SI’s Sportsman, Time’s POY and the SI “Swimsuit Issue,” Time Inc. has three of the magazine industry’s most marketable franchises.