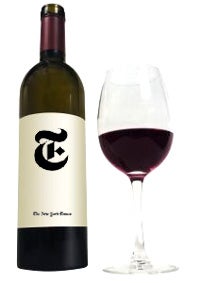 As they’ve watched their advertising revenues plummet, no one would blame newspaper executives for hitting the bottle every now and then. Or every now.

The New York Times, however, appears to be looking at this as an opportunity.

On Thursday, the paper announced something called the New York Times Wine Club, which will “offer members a selection of wines at two price levels, $90 or $180 per six-bottle shipment.”

“Just as readers expect The New York Times to bring them the world’s best journalism,” a note on the site read, “wine enthusiasts can be assured that it has chosen an organization that will make The New York Times Wine Club the best wine experience.”

Wine tasting notes will be included with each shipment, along with related articles and from the Times archives.

(An executive from the Times was quick to point out the club will be run independently, away from the paper’s food and wine editorial sections “so there would be no conflict or appearance that our critics were selling.”)

But before you enemployed sommeliers fire off your resumes to the Times’ HR department, it appears the club will be outsourced to the Global Wine Company.

The Wall Street Journal and San Francisco Chronicle, it should be noted, have their own wine clubs (not being a newspaper subscriber or glorified wino, I had no idea such clubs existed). So while it’s not a novel idea, the Times could clearly use any incremental revenue it can get it’s newsprint-smudged hands on.

All the news that’s fit to drink, as the Times would say.