An insider at the L.A. TImes confirmed that the paper received in the ballpark of $700,000 for the four-page spread that acted as the front page.

The ad was the subject of much chatter at the annual Publicists Guild luncheon, where even publicists wondered if this sort of stunt could work over time.

"At first I thought it was the actual front page, and I called my staff to ask if there was a printing error,"  said one studio veteran from a non-Disney company. "I wasn’t happy to see that at 5:55 am before my coffee. I don’t want to be seeing that mixed with my serious news, and it’s not as if the movie needs the push."

Others wondered if future front-page ads would have similar impact, since readers would be wise to the gig from now on.

But mainly, it turns out that even publicists want to see news on the front page of their newspaper.

In another first, the Los Angeles Times sold its front page to The Walt Disney Company in a special promotion for “Alice in Wonderland,” which is opening on Friday.

Instead of the actual front page, readers in Los Angeles are treated to a faux front page, complete with the traditional “Los Angeles Times” masthead, splashed with a full-color photo of Johnny Depp as the Mad Hatter. The image spilled over two “articles” on health care and Afghanistan. 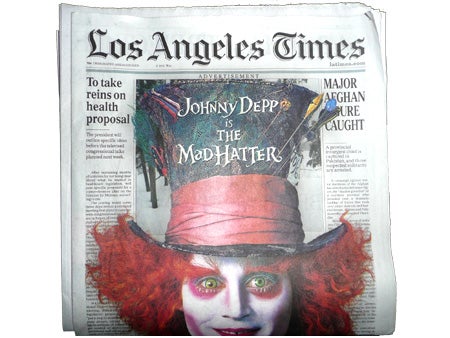 The actual front page required readers to turn the page.

One media buyer insider said the ad cost $700,000, but others said that figure seemed high. (Update: An insider at the paper confirmed that the sum was in the ballpark for what Disney paid.) Even at half that amount, it would be a huge take for the daily paper.

“We worked very closely with Disney to come up with an exceptional and distinctive way to help them open ‘Alice in Wonderland,’” said John Conroy, a spokesman for the Times. “It was designed to create buzz, and to extend the film’s already brilliant marketing campaign. “

The campaign may indeed create buzz, but perhaps not the kind that a newspaper might seek.

Last April, the paper stirred controversy by running a full-page ad on its front news page for NBC’s “Southland.” At the time, critics inside the paper and out accused the Times of selling its editorial integrity for an ad, because the ad appeared at a casual glance to be an article.

Similarly, this ad appears at a casual glance to be the actual front page, with slightly different fonts used for the articles on it.

In June, HBO bought a wrap-around of the L.A. Times front page with an ad for "True Blood," but the ad did not appear to be superimposed on the news.

Last year, journalism figures criticized the move. Robert Niles, a former journalism instructor at the University of Southern California, said then that the full front-page ad was  "a sign of just utter surrender by the Times that they wouldn’t think people would be freaked out by this."

"It’s a pretty dangerous road to go down for any news organization to actually sell advertising that covers up your news reporting," he said. "It really shows a lack of respect for the audience and a lack of confidence in your editorial product."

The April ad resulted in an internal controversy, which resulted in a protest petition signed by dozens of the editorial staff, and ultimately in the exit of executive editor John Arthur.

This time, it’s unclear if there was any internal dissent.  Conroy said the top editors were aware "well in advance" about placing the ad.

He also said he was not sure how much Disney paid for the special placement, but noted that the paper’s front page “is our most valuable real estate.”

In April the paper – whose parent company Tribune remains in bankruptcy proceedings – defended its decision to place the ad, and said it was one of several “innovative approaches” it was trying. “That includes creating unique marketing opportunities for our advertising partners, and today’s NBC ‘Southland’ ad was designed to stretch traditional boundaries,” the statement said at the time.

Conroy said the Times would seek to repeat this kind of project in the future. “We’re always looking for interesting ways for advertisers to distinctively market,” he said. “So we’re open to it.”