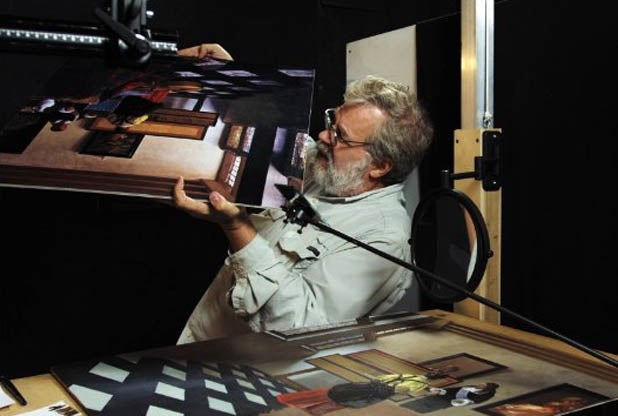 The most entertaining documentary you’re likely to see about watching paint dry, “Tim’s Vermeer” revolves around one man’s unlikely quest: To lay down pigment like the Dutch Master.

What’s more, computer entrepreneur Tim Jenison wanted to do it with the same tools that Johannes Vermeer would have had at his disposal in the 1600s.

Luckily for all, he shared this mission with an old friend, magician Penn Jillette, who convinced him to turn the quest into a film and enlisted magic partner Teller to direct it. Jenison brought a scientific resolve and funds from video software ventures to what would become a five-year project.

Unassuming and upfront about his artistic shortcomings, Jenison is key to the documentary’s charm. He freely admits his lack of skill as a painter, and in so doing serves as ideal guide for viewers who may be in the same boat. But Jenison is no ordinary dabbler — he’s a scientist.

And as a computer scientist, Jenison simply does not buy the notion that artists should not use available technology in their work.

The question he asks is, What technology might have Vermeer used to create such realistic looking paintings in an era before cameras were invented? Jenison has some hunches and throws himself into his scientific experiment, painstakingly building a replica of a Vermeer scene in a storage facility in Texas.

Before it’s over, painter David Hockney (who, in his book “Secret Knowledge,” originally theorized about Vermeer and other artists of the time using optics in their work) and actor-painter Martin Mull have lent their expertise; Jenison also gets a private audience with the real Vermeer painting he’s duplicating, which happens to be part of a collection owned by the queen of England; she, alas, does not make a cameo appearance.

It’s moments like the sequence shot outside Buckingham Palace where Penn & Teller’s experience making the long-running Showtime investigative series “Bullshit” becomes most evident. The segment of them filming near the queen shows a glimpse of what “Tim’s Vermeer” might have been had P&T followed the “Bullshit” model more closely. Instead, the filmmakers let Jenison be the star of his own production.

It was a wise choice. Jenison brings a low-key humor to the project, making self-deprecating asides about his unlikely quest. He flags a bit as the project stretches on – and so does the documentary. But then subject and film both perk back up; it’s a kick to watch Hockney react to the titular painting.

Penn & Teller’s “Bullshit” experience comes in especially handy in explaining old-school technology like camera obscura and other available technology in Vermeer’s day. With Penn narrating and Teller directing, they somehow manage to take potentially wonky material and portray it in a lively manner. That’s a feat in and of itself.

There’s also plenty of discussion about the role technology plays in the creative process, and the controversy about painters using rudimentary technology in their work. But the nuts and bolts never overshadow Jenison’s quest or the pleasure of viewing his completed faux Vermeer.

You don’t have to be a painter to admire his artistic accomplishment; his sheer focus and remarkable dedication to his quest transcend any single discipline.