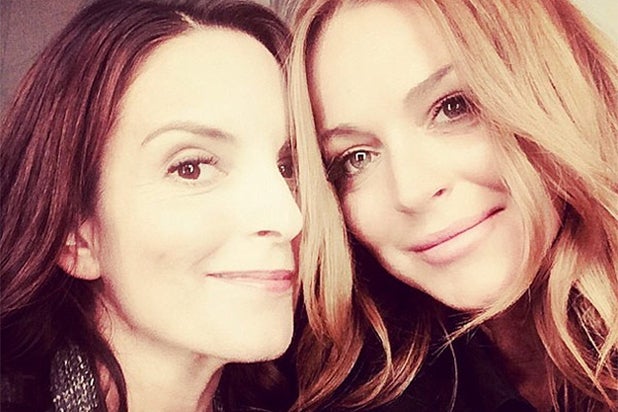 A mini-“Mean Girls” reunion was captured on film as Lindsay Lohan shared a selfie with co-star Tina Fey via Instagram on Tuesday.

“Lovely running into an inspiring, funny, beautiful old friend!!!!” she captioned the photo.

Fey and Lohan co-starred in 2004’s “Mean Girls,” which Fey also adapted. Lohan played Cady, who grew up in Africa and entered an American high school for the very first time. She navigates the wilds of “girl world” with help from Lizzy Caplan and faces off against the Plastics, the popular clique played by Rachel McAdams, Amanda Seyfried and Lacy Chabert.

The film has developed a cult following online and spawned one-liners and memes aplenty. With 2014 being the film’s 10th anniversary, fervor over “Mean Girls” has kicked up again, fueled partly by the cast.

Lohan herself already had another mini-reunion with Daniel Franzese, who played the “too gay to function” Damien, earlier this year. And McAdams, who played the ultimate mean girl Regina Geroge, picked her favorite lines from the movie in January as well.

Curiously, the newest photo with Fey has since been deleted from Lohan’s Instagram.