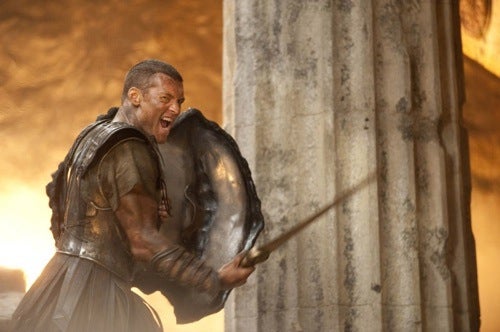 While “Kick-Ass” and “How to Train Your Dragon” duke it out at home, “Clash of the Titans” is still the No. 1 battle raging overseas.

The Warner Bros. mythology flick stayed on top of the foreign box office, due mostly to strong opens in Italy and Latin American territories. The film grossed $53.6 million on more than 10,000 screens, including debuts on 2,207 venues in places like Mexico and Argentina, and still has a Japanese opening to look forward to later this week.

“Titans,” which knocked “Alice in Wonderland” out of the No. 1 spot it occupied for a month, is still only the third title in 2010 to claim the foreign box-office crown (the other being "Avatar"). The Tim Burton fantasy from Disney moved to second position with $34 million from 53 territories.

"Alice" has grossed $827.5 million worldwide, making it Disney’s fourth largest success of all time; "Avatar" was still more than $2 million away from crossing the $2 billion mark overseas.

DreamWorks Animation’s “How to Train Your Dragon,” which won the weekend domestically by a nose over “Kick-Ass,” was No. 3 overseas with a $15.5 million weekend. It’s now made $176.5 million in four weeks at foreign theaters.

Fox’s “Date Night” took $8.1 million on the weekend while opening in six European markets, good enough for No. 4. And “The Bounty Hunter” rounded out the top five with $7 million.

“Kick-Ass” took in $2.6 million in four offshore territories; it’s been playing overseas for nearly three weeks, however, and is yet to open in key markets.