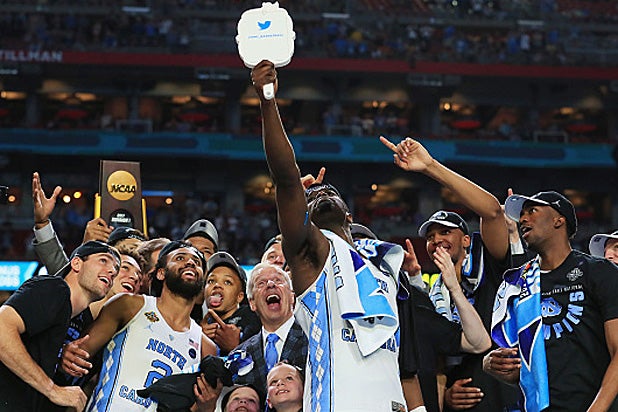 After three weeks of action, 68 teams and millions of busted brackets, the 2017 NCAA Tournament came down to east vs. west as UNC took on Gonzaga Monday night.

The Tar Heels came out victorious with a final score of 71-65 as Roy Williams’ team made up for the heartbreaking buzzer-beater loss to Villanova last year, a victory which the coach attributed to their motto for the season: “tough enough.”

Before the game, which tipped off at the University of Phoenix Stadium in Glendale, Arizona, UNC was favored by just 1.5 points over Gonzaga, according to OddsShark.

The Tar Heels’ redemption win sparked a rapid reaction on social media — along with the inevitable slew of Michael Jordan memes and proclamations that “the ceiling is the roof.”

See some of the best ones below.

YEAAAAAAHHHHHHHH UNC!! I had Tarheels from da start! Gonzaga was & is an amazing squad! Props 2 Few

If UNC's championship shirts don't say "The Ceiling is the Roof" then they deserve to be stripped of their title immediately.

Congratulations to legendary Coach Roy Williams and the @UNC_Basketball team! What a game! @ZagMBB fought until the end.

On vacay so up past my bedtime..congrats @UNC_Basketball winning #NationalChampionship! Can't help but think of #StuartScott #booyah ????

Congrats @UNC_Basketball on another great season. And another title.

Moments like these makes me think of @StuartScott #Booyah

Every Duke and State fan sit down…now. Don't even want to hear it.

Congrats UNC, but @IAmJericho would like a word with you… pic.twitter.com/QpjTeVMMQ5

Now UNC fans can exhale and shift focus to the Lakers and Yankees.

The UNC Tar Heels are 2017 NCAA champs! The ceiling really is the roof! pic.twitter.com/dV9JOx91xk

Congrats to @UNC and my favorite #TarHeel @KitHoover! We should have bet pie in the face 🙂