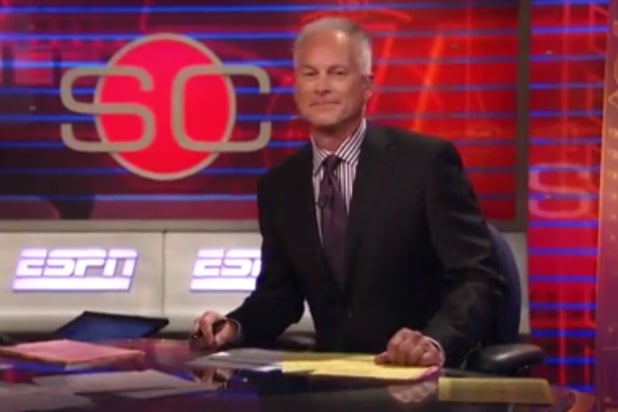 Just one day after Kenny Mayne returned to his “SportsCenter” anchor chair — following a five year absence — the veteran sports journalist is talking candidly about his likes and dislikes of the new ESPN deal.

“Well it was [ESPN’s] choice,” Mayne told TheWrap. “In this case it was kind of like, ‘Here’s what we want from you,’ and the other stuff was off the table. So it was either quit or do this, and doing ‘SportsCenter’ is not the worst thing in the world.”

Also read: ESPN’s Bill Simmons Rips Fox Sports 1: ‘Why Are We Even Talking About Them?’

Mayne was technically back as of Oct. 1, following a contract re-negotiation that landed the near 20-year ESPN employee with what he calls “sort of a part-time job.” But Monday night was Mayne’s first show under the new terms, and his first “SportsCenter” since 2008. The new deal excludes horse-racing — one of Mayne’s loves — ESPN the Magazine assignments, and football coverage. His online series, “Wider World of Sports,” which saw Mayne participating in events like mud football and corn-hole world championships, will not be a prominent part of his new job description.

“For some readers it looked like I had the keys to the place, and they took the keys away,” he said.

While he is happy to be back to the show that made him famous, the 70 “SportsCenters” and 10 features Mayne will complete year-over-year through 2015 is not quite how he would have designed it. That bums Mayne out, but he doesn’t need you to feel sorry for him.

“I’m not being cynical, it’s a great job compared to most things out there,” Mayne said. “I’m not working for sympathy, it’s just definitely a big change.”

The sports personality said that the business decision was exactly that. ESPN will get more bang for its buck taking him off of the web and onto it’s flagship highlights show.

“A little internet thing that takes me four months to put together … [ESPN thought], ‘We could have him go down and do [a bunch of] ‘SportsCenters’ and get more for our dollar,'” Mayne explained.

Of course, with the launch of Fox Sports 1, ESPN is no longer the only game in town. And Mayne entertained the thought of a switch, but it didn’t take.

“Fox didn’t want me,” Mayne told TheWrap. “Funny or Die likes me through.” That’s precisely where some of his original viral content will shift to. Mayne says that more Funny or Die videos are “coming.”

Mayne had some rust in last night’s “SportsCenter” return, he admits — but just a little. Mayne offered the following critique to TheWrap, delivered with his trademark dry wit: “It was a little weird. It was just mellow. I was pretty low-key in the preparations. [Just enough to] make sure I didn’t screw up, I give myself a B, B+. I didn’t suck. I’ll get better.”

As Mayne begins his second night behind the desk Tuesday, he maintains a very healthy perspective in his return.

“I always said I take serious things seriously and the other stuff less seriously,” Mayne said. “The rest of it is just games.”

K.M. is back, watch the videos of his return: