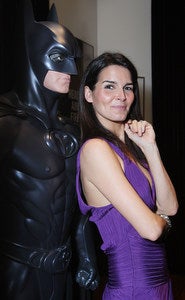 Gabourey Sidibe, Michelle Rodriguez, Viola Davis, Melora Hardin and a select crowd of female nominees wound their way up to Tara and Peter Guber’s Bel-Air compound for Women in Film’s pre-Oscar cocktail party on Thursday night. Despite the 250 people swilling champagne in his monstrous home office and ogling his impressive trophy case, the producer himself was unable to attend.

Co-host Cathy Schulman (Best Picture winner for “Crash”) drew nervous laughter from the crowd by urging the industry females in the room to help the next generation “take their place.”

While Angie Harmon posed with the lifesize Batman figure (at left), Sidibe met up with MAC cosmetics president John Dempsey (whose company donated $20,000 to WIF at the event) and WIF president Jane Fleming. (Photos courtesy of Wireimage/Alex Wyman) In anticipation of later celebrations in the weekend, sponsor Perrier-Jouët sent everyone home smiling with their own half-bottle of the pricey bubbly. 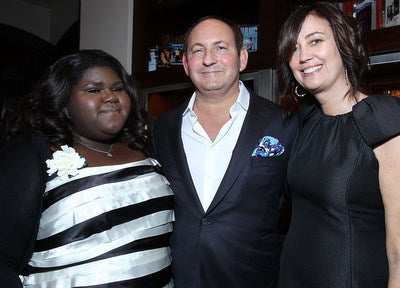 Later in the night, Susan Sarandon introduced L.A. to Spin NYC, a racquet club for ping-pong (yes, ping-pong) with a socially selective vetting process inspired by another hospitality brand that opened its doors in West Hollywood this week, Soho House.

Jamie Foxx took up the paddles for competition against various cast members from CBS’ “The Big Bang Theory,” who are known to bat a few balls around between shoots. (photo at right, courtesy of Wireimage/Anna Webber)

If you think Oscar winners hosting pre-awards ping-pong parties is stranger than fiction, you’ll be glad to know that “Entourage” creator Doug Ellin made it to the Mondrian-hosted 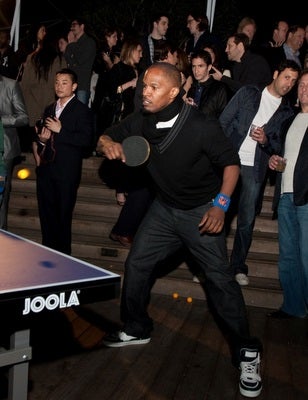 Meanwhile, a few hundred yards away down at Palihouse, Vanity Fair and BMW hosted the Art of Elysium’s “Pieces of Heaven” art auction. Elijah Wood was the official DJ for the night (not a photo-opp guest star) spinning tunes for Oscar nominee Anna Kendrick, a pair of Arquettes, David and Rosanna, and execs including Relativity Media’s Ryan Kavanaugh. Auction authorities Christie’s handled the gavel duties.