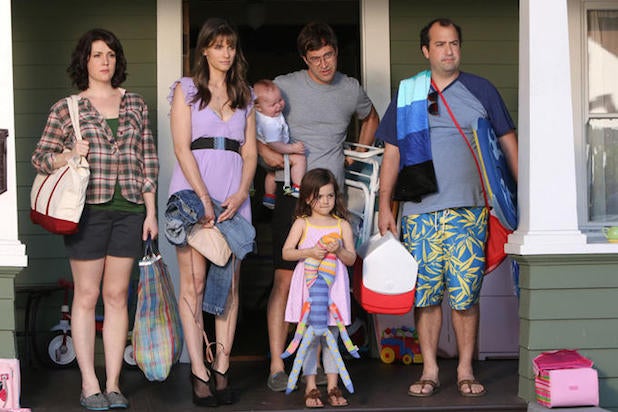 HBO’s latest half-hour series “Togetherness” debuted Sunday night as an alternative to the Golden Globes, and not only is it well worth your time, it’s also a worthy addition to HBO’s esteemed history of Sunday night programming. I watched all eight episodes in one four-hour period and fell in love with the relatable characters — the heartbeat of any good show — as well as the writing, which cuts deep in its unflinching honesty.

Mark Duplass and Melanie Lynskey star as parents in LA’s eclectic Eagle Rock neighborhood who take in her wacky sister (Amanda Peet) and his best friend, a struggling actor (Steve Zissis), when both need a place to crash.

Series creators Jay and Mark Duplass spoke to TheWrap in advance of the show’s premiere and talked about everything from the show’s spot-on casting, groovy music and universal themes to its nude scenes and the value of long-form storytelling on television.

Watch the entire first episode of this wonderful new series on YouTube.

“Togetherness” focuses on a very specific slice of Los Angeles. How did the project come about, and why was HBO the right fit?
Jay Duplass: The project started as a conversation Mark and I were having. We’d be hanging out and talking about things and people that were interesting to us. Something we’ve done or someone we know might be desperate or embarrassing, and we’d start giggling about it. [That’s how] this show started.

It’s about being in our late-30s and having young kids and being dedicated to our families and having our dreams come true and how much we were having our asses kicked by a 12-pound infant that can bring you to your knees in the middle of the night. We’re supposedly these titans of the industry and these kids are having their way with us.

It’s hard to find your happiness when you’re trying to meet the balance of being a good family man and doing your own thing. And the people who don’t have traction yet with their careers think the grass is greener, and then they hear stories and think, “Maybe we should stay where we are.” These stories kept going on and on and they were so funny and sad, it just seemed like more than a feature film. That’s when we started thinking about TV for the first time. We wrote a pilot and showed it to HBO and they loved it.

Mark Duplass: We were scared to do that thing where you write a pilot and fall in love with it, and then you get to shoot it and love it, and then a year later you’re canceled. We’d rather make indie movies we can control. This felt like it had to be a TV show, and HBO said, “You’re at a point in your careers where we can let you do it your way and cast who you want, and unless you shit the bed, we’ll give you a chance to do your show.” It wasn’t about “indie film is dead, let’s go to TV.” This project just felt like it belonged here.

Do you guys see “Togetherness” as Mumblecore going mainstream?
Mark: God no!

Jay: The truth is, we’re cavemen brothers making things, and though we’ve been called the godfathers of that movement, it was never decided we’d be part of a movement, especially not by us. We also don’t particularly see our work in the categorical grouping of mumblecore. Our characters are extremely driven about what they want, almost to a fault. Mumblecore has become a catch-all phrase for DIY filmmaking and it sounds like an exclusionary term; our goal in filmmaking is to invite as many people as possible in and share the specifics of our experiences and hope people relate to them. It’s about mining private moments because everyone has them.

Talk about the casting on this show, particularly Steve Zissis, who’s so natural on camera and relatable as Alex.
Mark: It’s not very often that the world gives you a 200-pound balding Greek muse, so you have to pay attention and honor that. We went to high school together and we love him. He’s extremely talented and funny and intelligent and he has a big heart. He was part of the impetus for this — we needed a platform to show how great he is.

With regards to Amanda Peet‘s character, Tina, do you see a lot of younger women clinging to successful older men in Hollywood?
Jay: You see it sometimes. What’s interesting about [Tina] for us is this transition point where clearly she’s a gorgeous person who has been able to skate by on her beauty alone, but she knows that’s not going to last forever and that’s what’s so prescient about this moment. What does a person who has been getting by on their looks do? How do they respond to that challenge and reinvent themselves? Are they going to collapse in failure? She’s on the precipice of that. She might be the most dynamic character we’ve ever created. There’s so much potential, yet it could go so wrong.

Mark, when you’re naked on all fours and otherwise vulnerable on this show, are there times where you question your instincts?
Mark: I don’t know what it is about me and Jay, but whenever we find something that could be a good scene, there’s not an ounce of hesitation or ego about doing it. It’s not a consideration, what I’m going to look like. Maybe I’m an intensely desperate person, but I don’t have a lot of reservations about that stuff.

Jay: There are moments where I’ll look up and Mark and Mel are mostly naked, and you think, “God damn, what the hell are we doing?” But we’re all imbued with a sense of purpose and execution, so we don’t question it.

Talk about the music, because I’ve been listening to songs from the show for the past month, especially Cate Le Bon’s “Are You With Me Now?” and Nurses’ “Trying to Reach You.”
Mark: One thing that’s great about doing an HBO show is you can afford to put great music in. With an indie film, you put great songs in and then you have to replace them. We got to show a lot of different kinds of music — Brett and Alex are into prog rock and Rush; Michelle longs for the sexual curiosity of The Cure, which is embedded in her soul; Tina is an ex-hair-band girl. We had a great music supervising team who brought us a lot of good ideas.

This show doesn’t have any superheroes or explosions in it. Do you feel like TV is becoming the place to tell these smaller, more intimate stories?
Jay: I think long-form storytelling is more suited to TV. There’s less artifice in general in long-form storytelling because you don’t have to wrap anything up. It’s sort of an open universe, and that aspect of it is appealing.

Mark: We’re not abandoning film — we’re still fighting the good fight. We have three movies at Sundance and an animated show, and we’ll always be a part of that space. It’s just about which story fits which form better.

This season ends in such an intriguing place. Where do you plan to take these characters in Season 2?
Mark: I’ll put it this way, we built a world where we didn’t plan on getting canceled after one season. We’re betting on doing a bunch of seasons and people liking it, so there’s plenty more to do if HBO gives us the chance.