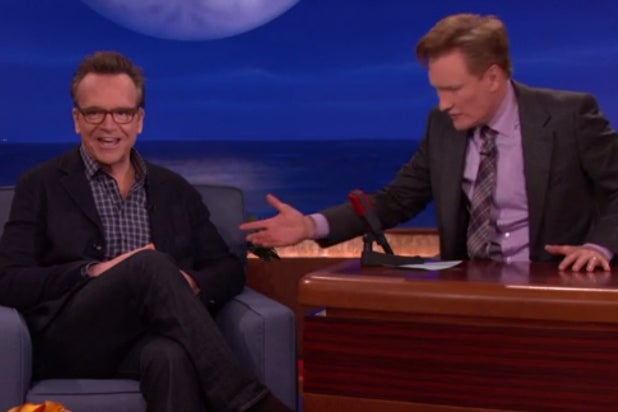 Tom Arnold looks great, and he has good friend and personal trainer Arnold Schwarzenegger to thank for humiliating him into the feat.

Also, working out surrounded by enormous guys in G-strings named Rolf (“This happens everyday over there … that is a fact”) doesn’t hurt for intimidation-based motivation, the actor told Conan O’Brien on Thursday night’s TBS stop.

“If Liberace had a gym — it’s like a Versailles — there’s columns and statues and paintings of his family,” Arnold described Schwarzenegger’s palace-like personal gym on “Conan.”

The one surnamed Arnold, not the bodybuilder, dropped 90 pounds with the help of the world’s greatest muscle-bound icon. Also, giving up eating an entire cake in one sitting probably didn’t hurt.

All of the effort — and the weirdness — in the name of the 54-year-old staying alive for his recently born first child has clearly paid off.

Watch the newly svelte Tom Arnold in the clip: