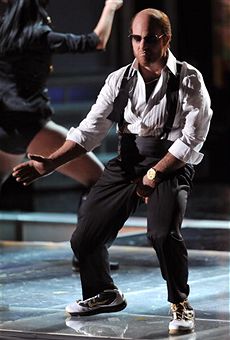 Les Grossman, the foul-mouthed movie producer played by Tom Cruise in "Tropic Thunder," is getting his own movie, Paramount and MTV Films announced on Wednesday

Cruise reprised the character at the MTV Movie Awards in skits that were probably the most entertaining parts of the evening.

Rumors of the spin-off swirled around the internet on Tuesday.

“Les Grossman’s life story is an inspiring tale of the classic human struggle to achieve greatness against all odds," said Stiller in the announcement. "He has assured me he plans to quote, ‘F**king  kill the sh*t out of this movie and make Citizen f**king Kane look like a piece of crap home movie by the time we are done.’ I am honored to be working with him.”

When asked what the screenplay was about, "Grossman" responded: “To quote my great friend Kirk Lazarus (Robert Downey Jr.), ‘I don’t read the script, the script reads me.’”

"Everything I learned in this business, I’ve learned from Les. I started out as his assistant, and from the first day he threw his desk at me when I got his lunch order wrong, I have loved him like a father," joked Paramount president Adam Goodman. "I am forever grateful to Ben [Stiller] and Stuart Cornfeld and their ability to secure his highly-coveted life rights."

Cruise next stars opposite Cameron Diaz in James Mangold’s action-packed romantic comedy "Knight and Day." He’s also set to star in Brad Bird’s "Mission: Impossible 4," which is in development at Paramount.