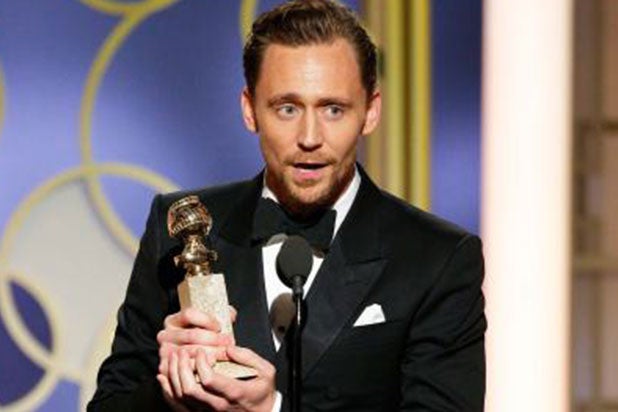 Tom Hiddleston has apologized for his “inelegantly expressed” Golden Globes speech from Sunday night, attributing it to his nerves.

“I completely agree that my speech at the Golden Globes last night was inelegantly expressed,” he wrote in a Facebook post on Monday. “In truth, I was very nervous, and my words just came out wrong. Sincerely, my only intention was to salute the incredible bravery and courage of the men and women who work so tirelessly for UNICEF UK, Doctors Without Borders/ Médecins Sans Frontières (MSF), and World Food Programme, and the children of South Sudan, who continue to find hope and joy in the most difficult conditions. I apologise that my nerves got the better of me.”

After accepting the award for Best Actor in a Limited Series of Motion Picture or TV for his role in “The Night Manager” on Sunday night, the British actor talked about an interaction he had while visiting Africa.

“One night we were having a bite to eat at the canteen, where we were staying, and a group of young men and women tottered over to the table, and we were all having what they call a ‘dirty beer’ in humanitarian language,” he said on stage. “They were a group of Médecins Sans Frontières doctors and nurses. And they wanted to say hello because during the shelling the previous month, they had binge-watched ‘The Night Manager.'”

He continued, “And the idea that I could provide ― or that we could provide ― some relief and entertainment for the people who worked for UNICEF … who are fixing the world in the places where it is broken, made me immensely proud.”

Many took to Twitter to bash the speech, with some calling it “self indulgent wankery” and “cringeworthy.”

just tuned in to watch a bit of Golden Globes. What a load of "humble" self indulgent wankery from Tom Hiddleston.

@Bob_Wilson2 I'm embarrassed for him. That was cringeworthy self indulgence

Wow, that Tom Hiddleston speech was beyond out of touch. Ouch. #GoldenGlobes

So #TomHiddleston had the most self-righteous speech I've ever seen. #douche #GoldenGlobes

Me waiting for that Tom Hiddleston speech to end. #GoldenGlobes pic.twitter.com/Gcl1erADZx

However, some people praised Hiddleston’s speech, writing “Tom Hiddleston‘s speech was so graceful, what a way to use that platform for something good” and stating that the actor doesn’t owe anyone an apology for the speech.