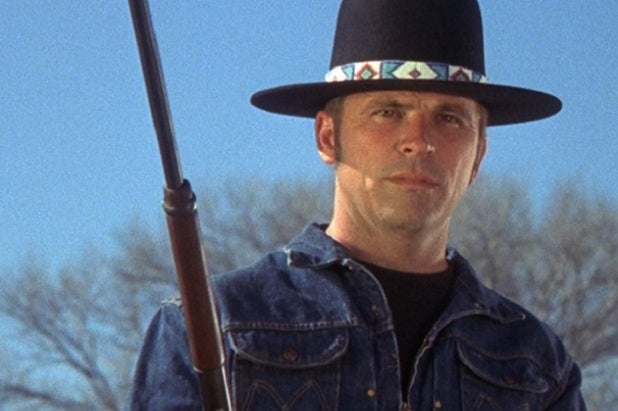 Filmmaker Tom Laughlin, who shot to fame as the rugged half-breed action hero “Billy Jack,” died Thursday in Thousand Oaks, Calif., surrounded by his family.  He was 82 years old.

While involved at one point with just about every facet of the film business, Laughlin may be best known for his series of “Billy Jack” films. He has been married to Delores Taylor since 1954, and she co-produced and acted in all four of the “Billy Jack” movies.

In addition to acting, he was a producer, director and screenwriter, and drew attention for a groundbreaking promotion and release campaign on 1974’s “The Trial of Billy Jack” that included TV trailers during national news and an “opening day” nationwide release that helped shape the future of film distribution.

In 1967, Laughlin wrote, directed (as T. C. Frank) and starred in the motorcycle-gang exploitation movie “The Born Losers,” the first film in which the character of Billy Jack appeared.

In 1971, he followed that up with a sequel, “Billy Jack,” which he made independently and with his own money. The numerous political references — and frontal nudity — caused several studios to shy away, but Warner Bros. finally agreed to distribute it. Laughlin, upset with the studio’s marketing of the film, sued to get it back, won and re-released it himself.

That re-release brought attention, box-office success and controversy. In it, Laughlin played the title character, a vigilante former Vietnam War hero who defends the hippie-themed Freedom School and its counterculture and Native American students.

“‘Billy Jack’ seems to be saying that a gun is better than a constitution in the enforcement of justice. Is democracy totally obsolete, then? Is our only hope that the good fascists defeat the bad fascists?'” said Roger Ebert in his review. “Billy Jack” was also one of the first films to introduce martial arts to mainstream movie audiences in the U.S.

“The youth of this country have only two heroes Ralph Nader and Billy Jack,” Laughlin said after the movie became a hit, particularly with young moviegoers.

Laughlin’s first directing gig was “The Proper Time” in 1957, followed by “The Young Sinner” in 1960, which marked the first time that he wrote, directed and starred in a film,

Laughlin was in many ways a maverick. In the early 1960s, he temporarily left his film career behind to start a Montessori preschool in Santa Monica that became the largest school of its kind in the United States.

In recent years, Laughlin became involved in psychology and domestic abuse counseling, writing several books on Jungian psychology and developing theories on the causes of cancer. He ran for President of the United States in 1992, 2004, and 2008.

His early career as an actor found him parts in feature films including “Tea and Sympathy” and “South Pacific” along with the original “Gidget.” His first starring role was in Robert Altman’s 1957 film, “The Delinquents.”

Laughlin is survived by his wife of 60 years, Delores, his children Frank, Teresa and Christina, his five grandchildren, and his sister Joan. Plans for a memorial service are in the works.

A service to celebrate his life is being planned and will be held sometime in early January.

In lieu of flowers, the family has asked that donations go to Alzheimer’s Research: www.alz.org or to the Pine Ridge Indian Reservation:
www.friendsofpineridgereservation.org.