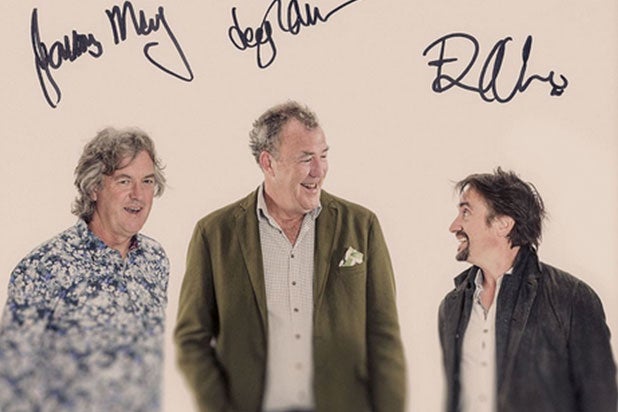 Former “Top Gear” hosts Jeremy Clarkson, Richard Hammond and James May have signed a three-season deal for a new show on Amazon.

Amazon beat out Netflix in the negotiations, who was initially interested in picking up the trio behind one of the world’s most successful and popular shows for car fanatics.

The show is still untitled, but will be produced by former “Top Gear” executive producer, Andy Wilman.

Clarkson and Hammond tweeted the news on Thursday morning.

I’m very excited to announce that Hammond, May and I have signed a deal with .@AmazonVideo

.@AmazonVideoUK now saying I can’t be their chief drone pilot. Apparently they want us to make a car show. — Jeremy Clarkson (@JeremyClarkson) July 30, 2015

Even the streaming service took to social media to announce the good news.

Amazon did not immediately respond to TheWrap’s request for comment and additional details about the series.

Clarkson was fired from BBC earlier this year following an altercation between him and the show’s producer, in which Clarkson punched Oisin Tymon. After Clarkson left the show, Hammond and May followed. The broadcaster then revealed that the hit show will be revamped with radio personality Chris Evans.

Since it first aired in the U.K. in 2002, “Top Gear” has grown from a straightforward show about cars into a global phenomena watched by 350 million viewers in 170 countries. According to the New York Times, Clarkson was paid about $1.5 million a year to present the show, making him one of the network’s most highly-paid employees.

The series was a fast-paced and stunt-filled motoring show that tests whether cars live up to their manufacturers claims.

“Top Gear” first aired in 1977 as a conventional motoring magazine show before being relaunched by the BBC in 2002 with hosts Clarkson, Hammond and May, along with Test Driver mascot, The Stig.