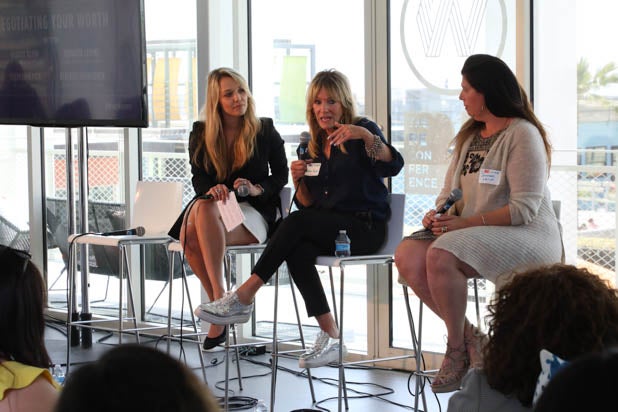 Inside Newsy’s Plan to Use Live Video – With a Focus on the Midwest, Not the Coasts

Beatrice Verhoeven, Debbee Klein and Jennifer Levine at the Negotiating Your Worth panel

Debbee Klein, a top agent in Paradigm’s TV literary department, has pledged that Paradigm will strive to achieve gender parity among its agents by 2020.

“At Paradigm, we’ve made a big commitment to 50/50 by 2020 and I hope we get there. There’s never been a year where it’s more advantageous for women to get hired,” Klein said Thursday at TheWrap’s third annual BE Conference at the Annenberg Beach House in Santa Monica, Calif.

“It is important that our agency pool reflects our client list, and most of these agency pools don’t right now. They are male-driven, they are white for the most part. They are good agents, but it’s time to open this up and take that seriously,” she said in a panel with Untitled Entertainment’s Jennifer Levine moderated by TheWrap’s senior film reporter Beatrice Verhoeven.

“I’m not saying it’s going to be exactly 50/50, but that’s our goal by the end of this year, and I think we’re on our way. If we recognize the problem usually we can fix it.”

Klein and Levine also discussed strategies for starting careers in the entertainment industry.

“I’m a big believer in finding mentors,” said Levine. She recommends that women who are just starting out try sending a “fan letter” to an executive they admire as a way to start a conversation. “Research an executive, say ‘I read all about your career… can I buy you a latte?'” she said. “It takes a little bit of moxie to do that.”

At Untitled, Levine represents a group of writers, directors, producers and actors and served as producer on feature films such as “Lavender” and “This Beautiful Fantastic.”

Klein emphasized that no job is too small when you’re just starting out. “I started as a receptionist at a production company when I was at UCLA,” Klein said. “Whatever job it is — mailroom, receptionist — take it.”

Levine agreed. “I don’t think any job is a mistake, because even the bad ones you learn from,” she said. “Don’t be afraid to try things as you’re coming up, because the things you don’t like you rule out.” “The people who surround you in that position — that’s the next executive,” she said. “They’ll help you and you’ll help them.”