Jean Dujardin has worked steadily since he won the Oscar for Best Actor in 2012 for his role in “The Artist,” but few of his subsequent parts have been as memorable as his new one, in Claude Lelouch’s lyrical “Un Plus Une.” The film had its premiere at the Toronto International Film Festival this week.

As a film composer whose playboy ways take a hit when he finds himself drawn to the wife of a French diplomat in India, Dujardin brings abundant charm but also depths of sadness to Lelouch’s moving romantic comedy.

He answered TheWrap’s questions through a translator.

What appealed to you about this film?

The encounter with Claude Lelouch, the love story, the adventure and the freedom of acting with Lelouch.

Are there ways in which you identify with the character?
Yes. I know it’s a little bit instinctual when you are acting these kind of roles. There are some cliché ideas about man, a bit of me and a bit of Claude, and that together brings the complexity of the character. But as for me, I do like to bring my silliness into the character.

How familiar were you with Claude Lelouch’s previous films?
I was very familiar with his work. I really like his two-character films — the face- to-face aspect that is very “Lelouchian.” I really like the sense of freedom that comes when you set foot in these kinds of stories.

What was it like filming in India?
The first few days are pretty difficult because your senses are overstimulated, and then on top of it you feel very moved because you are witnessing some very dramatic scenes. After a while you start seeing different things and you ended up feeling very good.

There is a wisdom in the eyes of the people of India, and a wisdom in their smile. So I kept on acting, discovering and I was letting myself voluntarily be stolen by Claude.

The film is about two characters who are drawn together, even though they shouldn’t be together — and without giving anything away, the audience doesn’t know at the end of the film whether they’ll end up together. What do you think? Do they have a happy ending?
I don’t really know. I think they are not on the same page. I really feel that she fell in love very quickly, and as for him he did not really fall in love and that he’s a little afraid of love.

There might be a happy ending, but I’m not sure what attracted him, whether it was her or just life by itself. And that’s what I like in this movie, that things are not set and we can see the visible and the invisible at the same time. 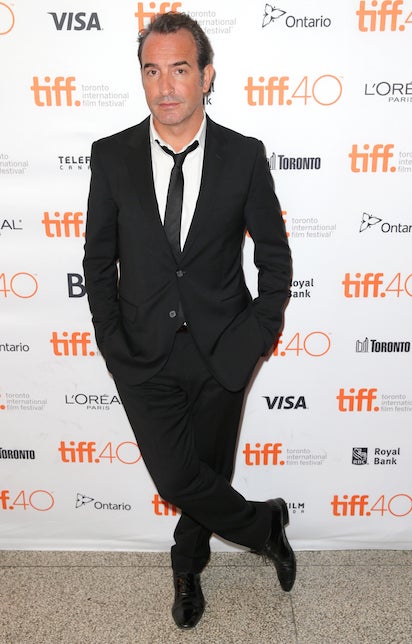 What was the most challenging part about making the film?
Not to drink water from the tap in India was the most difficult, and not to have too much spicy food! Besides that, nothing was difficult, all was pleasure and something to be done again.

What was the most fun part?
To be thrown into scenes that could last 20 to 30 minutes without knowing what your co-actor or what Claude would come up with.

How did your life change after “The Artist” and winning the Oscar?
It for sure gave me more assurance and probably more freedom, and also gave me time to think of what I really want to do.

One of your co-stars in that film, Uggie, recently died. What are your thoughts on his passing?
I’m very proud and happy that Uggie had reunited with the other famous dogs like Rin-Tin-Tin. And I do hope he’s eating some sausages and some crème patee while watching some of his movies.

Do you have ambitions to make more movies in the United States?
To be honest with you, it’s not something that I can decide. They decide, you know, and I am not that naïve to think it’s up to me. I have not yet decided to aim for a career there — I am for the time being in France, I shoot in France, and I do like to shoot in France. If there were a huge opportunity in the States, then I would put in an effort to do it.