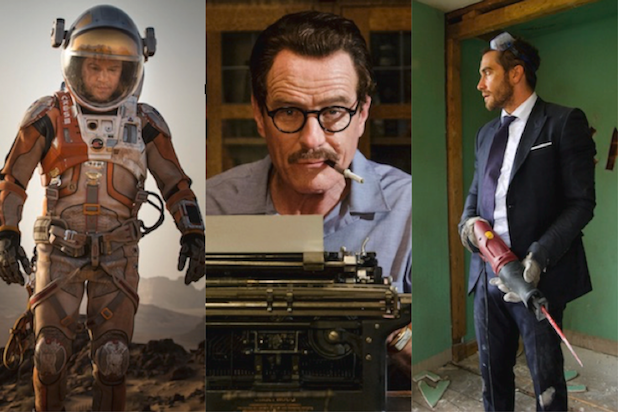 Matt Damon in "The Martian," Bryan Cranston in "Trumbo" and Jake Gyllenhaal in "Demolition"

From “Demolition” to “The Martian” to “Trumbo” to “Where to Invade Next,” many of the festival’s highest-profile films have been wildly entertaining. Toronto is supposed to be a showcase for the fall’s big awards contenders, but for the most part this hasn’t been a festival for stuffy Oscar-bait cinema. Instead, it’s served up a steady diet of movies that care more about delivering pleasure than inspiring respect (though they wouldn’t mind doing both).

Opening night was a case in point. The festival kicked off with Jean-Marc Vallee‘s “Demolition,” which stars Jake Gyllenhaal as a man whose wife dies, but the film still manages to be raucous and funny.

And then firebrand documentarian Michael Moore showed up with his first film in six years — and “Where to Invade Next” turned out to be Moore’s funniest film ever, filled with more belly laughs than agitprop provocations.

“The Martian” director Ridley Scott told the audience it was OK to laugh, a suggestion his energized spectacle made moot.

“Trumbo” director Jay Roach took the light touch he’d displayed in movies like his HBO Sarah Palin film “Game Change,” and turned it on the Hollywood blacklist and writer Dalton Trumbo, embodied in a delightfully outsize performance by Bryan Cranston.

(Despite its dead-serious subject matter, “Trumbo” will likely be submitted to the Golden Globes in the comedy category.)

Even “Freeheld,” a Julianne Moore/Ellen Page movie about love and cancer and the fight for gay rights, drops in a flamboyantly comic Steve Carell performance that elicits laughs while the rest of the film goes for sniffles.

Elsewhere at the festival, we’ve seen muscular gangster movies: a powerhouse Johnny Depp in “Black Mass,” which doesn’t officially premiere until Monday, and Tom Hardy costarring with himself in “Legend.”

Some buyers have even seen the presumably crowd-pleasing Aretha Franklin doc “Amazing Grace,” though that pleasure was denied the rest of us because of Franklin’s legal objections.

There have, of course, been some more traditional awards films, most notably Tom Hooper‘s “The Danish Girl,” which couples a timely subject (transgender issues) with a lush period setting (1930s Europe), sure-nominee performances by Eddie Redmayne and Alicia Vikander and Oscar-approved direction by Hooper. He last played this festival with “The King’s Speech,” which went on to win the Oscar for Best Picture.

Meanwhile, a slew of European films have kept the lower-key arthouse vibe alive, among them the Palme d’Or winner “Dheepan,” other Cannes entries “Son of Saul,” “Embrace of the Serpent” and “Cemetery of Splendour,” Claude Lelouch’s lyrical “Un Plus Une” and Martin Zandlivet’s harrowing “Life of Mine.”

Then there’s Cary Funkanaga’s “Beasts of No Nation,” which almost falls into a category of its own. The tale of a child soldier in Africa is so brutally violent that it’s hard to watch, but so emotionally riveting that it’s hard to turn away — and it’s delivered by a director coming off the first season of the HBO series “True Detective,” a filmmaker with formidable technical skills that he knows how to put in the service of gripping storytelling.

It has been a strong, solid (and drizzly) TIFF so far, with a few misfires but a lineup of films that more often than not delivered. This despite the fact that the big-money deals are missing in action, maybe because the biggest acquisitions of recent years haven’t gone on to much success. (Chris Rock‘s “Top Five” was the hot ticket at this time a year ago.)

So now, as Monday morning approaches, the buyers circle warily and 100 or so new films prepare for their unveilings during the festival’s final week, we have ourselves a 40th anniversary TIFF in which art and entertainment have coexisted nicely.

Now, if it’d only stop raining, this could turn into a pretty great festival.