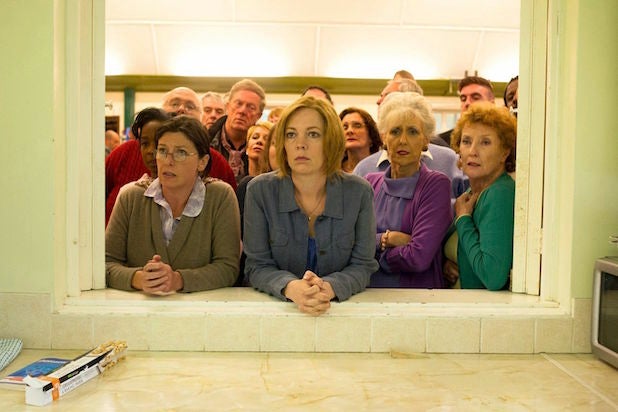 Much of the attention at the 40th Toronto International Film Festival on Thursday went to the opening-night film “Demolition” and Michael Moore documentary “Where To Invade Next.” But TIFF’s first day also showcased a handful of other films, including the intriguing “London Road,” the harrowing “Land of Mine” and a Wim Wenders misfire, “Every Thing Will Be Fine.”

One of the most intriguing entries was “London Road,” a film based on the British stage musical about the residents of a street where a serial killer preyed on prostitutes. The songs are all taken verbatim from interviews, news reports and testimony, with every stutter, um and uh used to give the songs an odd, playful rhythm.

The result, which won raves on the West End, is simultaneously impressive and disappointing onscreen.

It’s impeccably executed, to be sure, by Rufus Norris, the original director of the stage production. The songs, written by Alecky Blythe and Adam Cork, are extremely witty in turning ordinary speech into song. (Though the feat often does so at the expense of melody.) The bigger problem, at least for me, is that human emotion tends to get lost in the amazement over the degree of difficulty.

Incorporating all those ums and uhs into songs that tell a story is one thing. Connecting to the feelings of neighbors who are coping with a series of murders on their street is something else entirely, and something that for the most part the screen version of “London Road” doesn’t quite do.

But a potent reminder of what the film can be comes in a scene halfway through, when the action shifts from the residents to three haggard prostitutes singing about the killings. Their song, “We’ve All Stopped,” is also assembled verbatim from interviews, but it manages to be not only technically impressive but deeply moving.  Another brief sequence at the end featuring Kate Fleetwood as one of the prostitutes walking through a community celebration ends the film on such an emotional note as to suggest that the filmmakers knew the largely-unseen hookers are the heart of their film.

The actors include the always-impressive Olivia Colman, as well as Tom Hardy, who shows up in a couple of scenes in a tiny role that manages to also be an annoying piece of misdirection. Most of them are clearly actors rather than singers, but that’s kind of the point.

Other notable first-day films include a number of foreign entries, among them the harrowing Danish film “Land of Mine,” which turns the difficult trick of making you feel for the bad guys in World War II.

The film deals with young German soldiers who weren’t allowed to leave occupied Denmark at the end of World War II until they defused more than a million land mines their army had planted along the coast. “Land of Mine” is two hours of serious tension, as soldiers who appear to be too young to shave defuse mines while the audience waits for the inevitable failures.

It’s a gripping thriller and an effective character study of young men in impossible situations, and of a Danish officer who wants to treat them like animals but finds himself unable to do so.

Still, sometimes the moves are telegraphed and beats are too obvious, as when you know a lengthy and idyllic soccer game on the beach is going to end badly. And the ending feels tacked on, in a way — it’s more dramatically satisfying than the downer denouement that seemed to be coming, but it feels false in a way that a darker ending wouldn’t.

“Mustang” also has an ending that feels more like a fantasy than the dark reality that preceded it. The film from Deniz Gamze Erguven deals with five girls in Turkey, their ranging from a preteen to a few teens, whose playful antics with a group of boys cause such outrage in their small community that their family essentially turns them into prisoners.

The girls are forbidden to leave the house, subject to strict Islamic courses in how to be a good wife and forced into arranged marriages. As the treatment of women in the Islamic world continues to grab international attention, this is a timely subject, with its sympathetic heroines subject to a long list of indignities as horrifying to us as they are to the girls.

Another film apt to anger the hard-liners in its country of origin is Jafar Panahi’s “Taxi,” the latest in a series of films the Iranian director has made while officially forbidden from working by the government. The film manages to be wry, witty and subversive at the same time; it’s a funny micro-budgeted film about the director driving a taxi around town, but also a dead-serious look at creating art and living one’s life under a repressive regime.

And then, sadly, there was the biggest misfire I saw on opening day. Wim Wenders‘ “Every Thing Will Be Fine” continues the German director’s fascination with 3D, which began with his brilliant, Oscar-nominated documentary “Pina.” In that film, he used the 3D form to create the spaces in which the choreographer Pina Bausch stages her remarkable dances.

Extending the technique to a low-key drama is problematic: The 3D is occasionally arresting, but so subtle as to make you wonder why he bothered. But it’s not as problematic as the apparent contest between James Franco, Charlotte Gainsbourg and just about every other actor onscreen to see who can speak the slowest, pause the longest and deliver the most morose looks.

Among the other first day films were the gripping Cannes favorite “Son of Saul” and Natalie Portman‘s “A Tale of Love and Darkness,” which was panned in Cannes but came to Toronto hoping for a better reception.