In this season of mediocre showings, Sony Pictures has been having a remarkably good run, most of it due to some bottom-line dealmaking and marketing to the one area where box office dollars are still growing: the international multiplex.

The last two weekends make the point. With a massive $230 million opening weekend for “2012" setting a record for a non-sequel, and this weekend bringing the total box office to an astonishing $449 million, Sony’s international business this year has climbed to a new record for the company, totaling $1.6 billion. 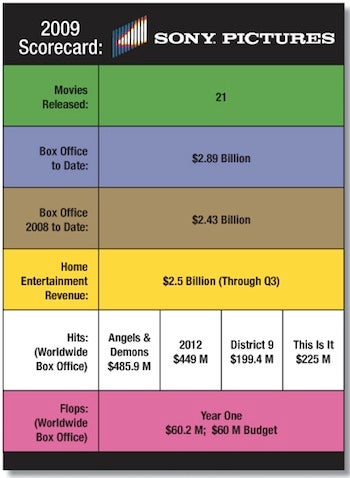 The Roland Emmerich disaster picture is just the latest example of why it pays in Hollywood to push hard for movies with international potential.

With miserable domestic reviews, the movie failed to overwhelm American audiences, but the global campaign was carefully coordinated to maximize marketing efforts.

The revenue from abroad now comprises 76% of what the movie has brought in so far, and Sony projects it could end up bringing in $700 million worldwide.

Meanwhile “This Is It,” the Michael Jackson concert film to which Sony bought the rights for $60 million, has outgrown its soft domestic opening to become a legitimate hit thanks to the foreign box office. At $130 million thus far it represents nearly twice the domestic receipts.

“What I like most about these kinds of results, is that we do have a global marketing and distribution team, and there are not that many of them around,” said Jeff Blake, chairman of Sony Pictures Worldwide Marketing and Distribution, in an interview with TheWrap.

"To have a team that can go from, ‘We hear there’s footage’ of Michael Jackson in August, to a worldwide global release in October … that’s valuable to have.”
There is little new in the rise of international box office, which now makes up fully two-thirds of the billions of Hollywood box office dollars. But at at a time of instability across the film business and challenges to Hollywood’s longstanding structures, Sony has managed to capitalize on this one bright spot with a combined domestic and foreign marketing team.
And the pattern of international success seems to have shifted. Movies once relied on success in the American market to propel success abroad; now movies like "2012" and "Angels and Demons" are led by the foreign box office. 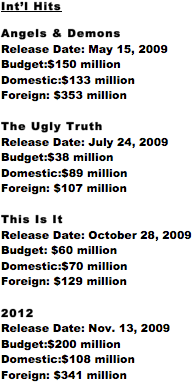 Coming on the heels of a similarly successful box office year in 2008 – the studio claims that every release that year was profitable — suggests that this is not mere coincidence.
"It takes a coordinated team" to release a movie like "This is It," in a matter of weeks, around the world, said Blake.
More Hits Than Misses
Executives at Sony point to another element in the studio’s current success, —  a shift away from overpriced projects to lower cost comedies and dramas.
Movies like “Paul Blart: Mall Cop,” ($183 million), “The Ugly Truth” ($196 million) and "Julie and Julia” ($118 million) were all made for production budgets under $40 million, according to studio estimates.
"District 9," made for $30 million and acquired by Sony, has taken in $200 million around the world.
Sony has had some flops this year, notably “Year One” (an international no-show, by the way, at $17 million) and — ironically — the Clive Owen thriller “The International,” which barely made back its $50 million production cost at the box office. Both will lose the studio money.
But the efforts of Columbia Pictures presidents Matt Tolmach and Doug Belgrad have been instrumental in promoting lower-budget projects that have been winners with audiences. Tolmach has especially cultivated a relationship with star comedy producers like Judd Apatow, turning up high-margin winners like the sleeper hit "Zombieland" which was originally developed at Sony as a television project.
What the studio can’t change, however, is the state of declining DVD sales. Success at the international box office, no matter how robust, will not be enough to offset a drop of 20 percent and more of what was until recently the movie industry’s crowning profit prize.
"All we can do in theatrical is create the excitement, brand the product and get as much revenue as we can," said Blake. "There are other big issues hanging over the industry. There is no quesiton that DVDs hang over eveyrbody, no matter how much the box office grows."
x
Looks like you're enjoying reading