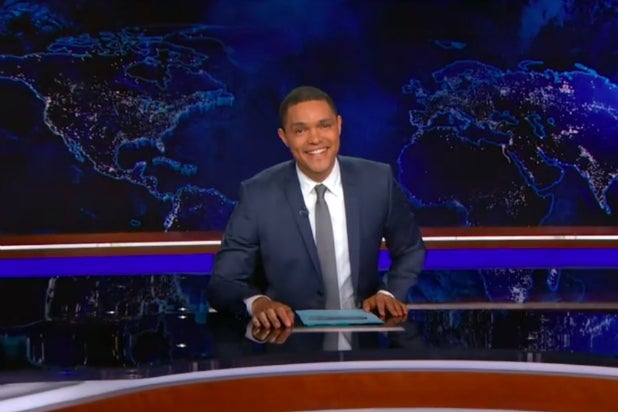 Trevor Noah got off on the right foot during his first night as host of “The Daily Show” but definitely has room to improve, according to reviews.

Many critics credited Noah with keeping the format of the long-running Comedy Central news program essentially unchanged, and agreed that the South African comedian needs time to grow into the role vacated by Jon Stewart.

“[Noah] proved in his debut Monday night that he was far from a risky proposition,” Daniel Holloway wrote in his review for TheWrap. “Noah was polished, funny and most of all cool. While his tone of amused outrage was similar to Stewart’s, the simple facts of his youth and his looks — Jon Stewart never in his life wore a suit that well — separated Noah from his predecessor.”

Here are five other opinions on the revamped satirical news program’s season premiere.

Brian Moylan of the The Guardian:

“Noah had an average first night, neither killing it nor completely embarrassing himself. It will take him months to really find his rhythm and must distinguish himself with how he tackles certain key events – something Stewart did with career- and zeitgeist-defining gusto. Those are big shoes to fill, and it’s almost like Noah is too close to Stewart’s style. Many of the same writers remain, and the structures of his jokes – the funny voices, snide asides, tickled bemusement – echo Stewart’s but are delivered differently, with a sneer that made Noah look a bit too amused with himself. Stewart was many things, but he was never smug.”

“Someday, ‘The Daily Show’ may truly belong to Trevor Noah. But not yet. To be fair, how could total ownership of that Comedy Central staple transfer in just one night, when Jon Stewart had 16 years to turn it into an institution? Any new host would need some time to catch up and take over, and newcomer Noah is no exception.”

“Noah’s inaugural ‘Daily Show’ — largely written and produced, as he noted Friday, by the same team that was still backing Jon Stewart up until last month — didn’t exactly break any molds… It may not exactly be a revolution, but hey, it took Stewart at least a year to differentiate his ‘Daily Show’ from Craig Kilborn‘s. Maybe once Noah is firmly out from under Stewart’s looming shadow, he’ll be able to do the same thing.”

“The network kept Noah under wraps after announcing that he would take over for Stewart. With his ever present smile, he projects a genial, almost mild camera presence but lacks anything resembling the kind of edge that made Jon Stewart a name to be reckoned with. He has a hard road ahead of him.”

Erik Adams of The A.V. Club:

“Trevor’s not the stepdad in this scenario; he’s the kid who’s been left with dad’s really cool, very valuable car. Any modifications to the vehicle are so far superficial; in his inaugural turn at the wheel of ‘The Daily Show with Trevor Noah,’ he didn’t take the car out on the highway and open ‘er up. He took a gentle ride around the block, picking up friends old and new along the way, eventually finding a parking spot where he could take out his phone and share this Kevin Hart clip he just found on YouTube.”